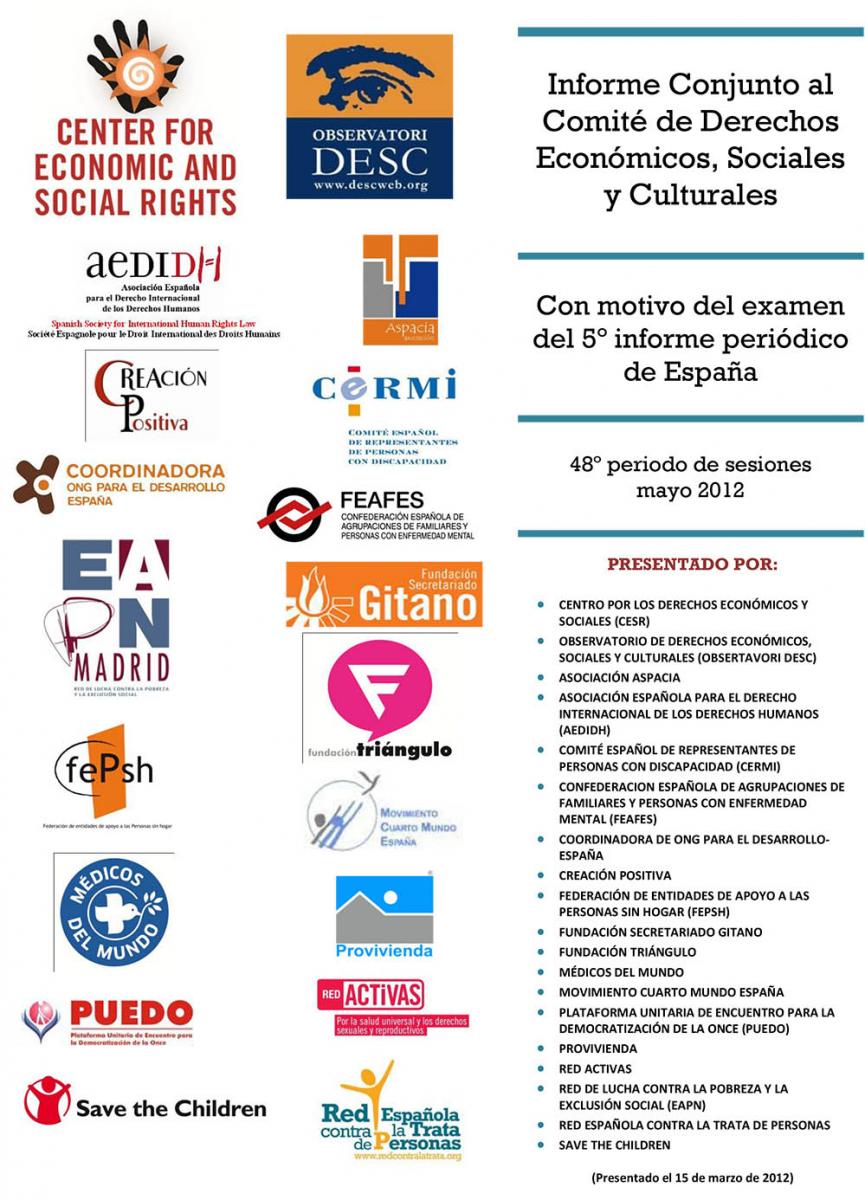 As the spectre of a double-dip recession continues to spread across Europe, economic and social rights are coming under increasing pressure. The human rights impacts of the global economic crisis, and the danger of policy measures designed to socialize its costs, have become painfully evident in Spain, where unemployment, poverty and inequality stand at a historic high, putting Spain at the tail end of Europe on many socioeconomic indicators.

In this critical context, CESR has coordinated efforts by 19 Spanish civil society organization to submit a joint parallel report to the UN Committee on Economic, Social and Cultural Rights (CESCR), on the occasion of Spain's appearance before the Committee in early May 2012. The report analyzes the current state of these rights in Spain, providing an alternative account to the State's report to the Committee. The civil society report focuses in particular on rights under threat since the onset of the crisis and the implementation of austerity measures by the previous and current governments, including the right to work and other labour rights, the right to social security, the right to a decent standard of living, and the rights to housing, health and education.

The State report, submitted in 2009, does not address the crisis and makes no mention of poverty. Yet as the civil society report notes, more than a quarter of the population is now at risk of poverty and exclusion, and the figure is even higher among children. Unemployment is the highest in the developed world at 23 per cent, with youth unemployment at a staggering 46 per cent - one in every two people under 25. The deprivations facing children and young people threaten to have long-term generational consequences for ESC rights enjoyment in the country.

The report questions whether Spain is taking all the steps required under the Covenant to use the maximum available resources to realize the rights of all members of the population, without discrimination, and to ensure there is no retrogression or backsliding in economic and social rights protection.  Austerity measures adopted to reduce the budget deficit have focused on drastic cuts in social spending - notably health, education and housing - affecting those groups already bearing the brunt of the crisis. The situation of vulnerable groups is likely to be prejudiced again by the 2012 budget, which demands further cuts of 15 per cent in government spending in order to keep pace with the stringent deficit reduction targets imposed by the European Union.

While cuts to social spending have been severe and have affected lower income groups disporportionately, less attention has been given to income generation through more equitable tax reforms. Tax evasion in Spain, which primarily benefits wealthy corporate interests, has been estimated at around 23% of its annual GDP and according to the Spanish Union of Tax Inspectors (GESTHA) was  equivalent to some €88 billion in 2010 - more than three times the 2012 budget deficit reduction target of €27bn.

Recent years have seen a spike in the gap between the richest and poorest income groups, with Spain now ranking among the most unequal countries in Europe and inequality levels rising faster than any other European nation. This suggests that the burden of austerity measures in response to the crisis is not being shared equitably, as recently noted by the OECD.

Spain's appearance before the CESCR in May - the first time in eight years - offers a pivotal opportunity to hold the State accountable for the human rights impact of its economic and social policy measures.  It could also set a precedent on how the Committee addresses states' compliance with their human rights obligations in times of economic recession.

CESR and other civil society groups in Spain have submitted the report in the hope that the Committee will remind the Spanish government that it is required to take corrective steps immediately when retrogressions in economic and social rights are identified. The government must also undertake a rigorous human rights assessment of all future deficit reduction measures and possible alternatives to them, in order to ensure that the measures adopted are consistent with Spain's international and domestic human rights obligations. These obligations were spelled out in a joint letter sent by CESR, Amnesty International Spain and Observatori DESC to Prime Minister Mariano Rajoy when he assumed leadership of the country earlier this year.

Spain will be reviewed by the Committee on Economic, Social and Cultural Rights on May 7-8th, 2012 in Geneva.  The 19 civil society organizations which participated in the parallel report are listed at the beginning of the document.