The Group of 20, Financial Regulation and Human Rights

This briefing, which has been produced as part of a collaboration entitled 'A Bottom-Up Approach to Righting Financial Regulation', examines how human rights should inform the G20's role in managing the financial system. CESR has joined the Steering Committee of this new initiative, which also includes the Center of Concern. The Association for Women's Rights in Development, Civicus, Social Watch, DAWN, ESCR-Net and iBase30. 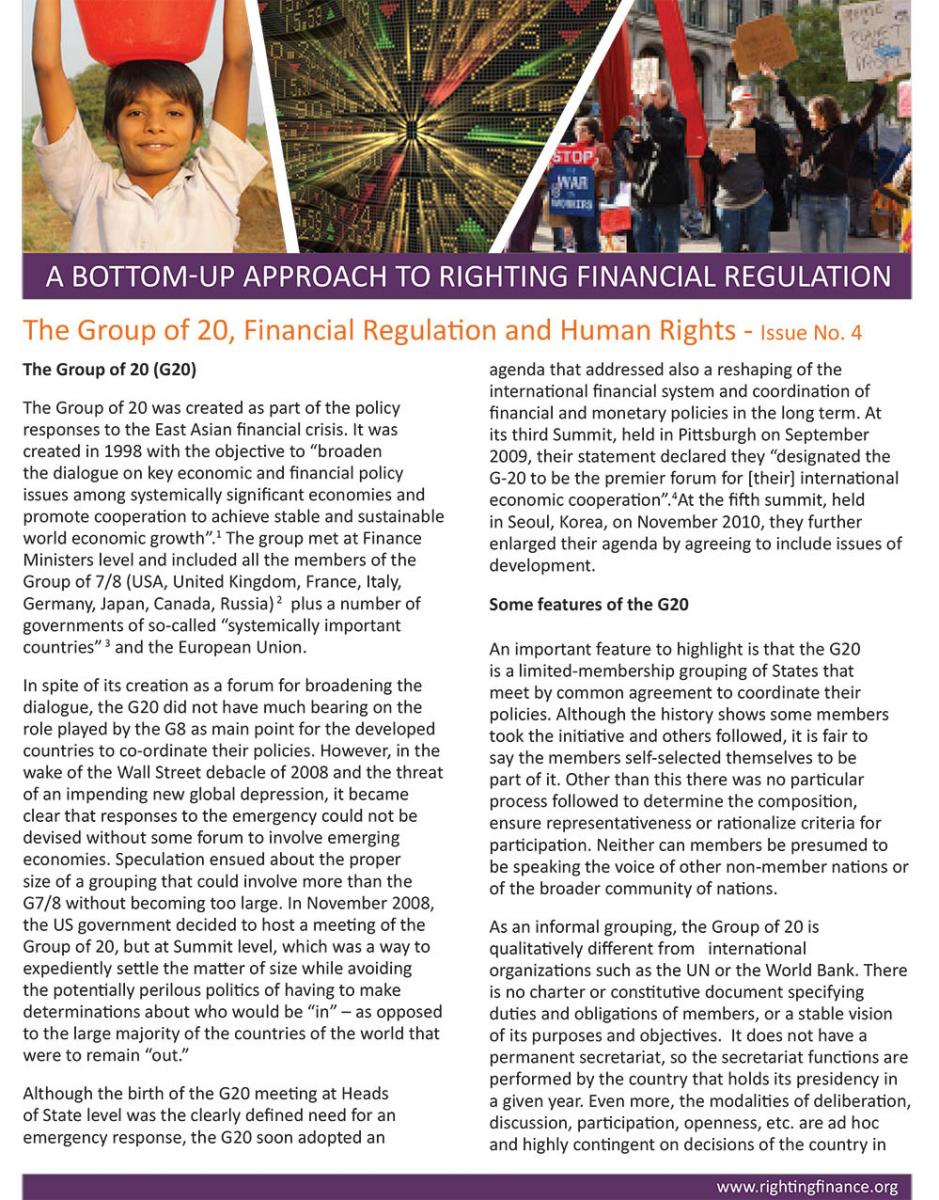 The Group of 20 was created as part of the policy responses to the East Asian financial crisis. It was created in 1998 with the objective to "broaden the dialogue on key economic and financial policy issues among systemically significant economies and promote cooperation to achieve stable and sustainable world economic growth". The group met at Finance Ministers level and included all the members of the Group of 7/8 (USA, United Kingdom, France, Italy, Germany, Japan, Canada, Russia) plus a number of governments of so-called "systemically important countries" and the European Union.

In spite of its creation as a forum for broadening the dialogue, the G20 did not have much bearing on the role played by the G8 as main point for the developed countries to co-ordinate their policies. However, in the wake of the Wall Street debacle of 2008 and the threat of an impending new global depression, it became clear that responses to the emergency could not be devised without some forum to involve emerging economies. Speculation ensued about the proper size of a grouping that could involve more than the G7/8 without becoming too large. In November 2008, the US government decided to host a meeting of the Group of 20, but at Summit level, which was a way to expediently settle the matter of size while avoiding the potentially perilous politics of having to make determinations about who would be 'in' as opposed to the large majority of the countries of the world that were to remain 'out'.

Although the birth of the G20 meeting at Heads of State level was the clearly defined need for an emergency response, the G20 soon adopted an agenda that addressed also a reshaping of the international financial system and coordination of financial and monetary policies in the long term. At its third Summit, held in Pittsburgh on September 2009, their statement declared they "designated the G-20 to be the premier forum for [their] international economic cooperation". At the fifth summit, held in Seoul, Korea, on November 2010, they further enlarged their agenda by agreeing to include issues of development.

Some features of the G20

An important feature to highlight is that the G20 is a limited-membership grouping of States that meet by common agreement to coordinate their policies. Although the history shows some members took the initiative and others followed, it is fair to say the members self-selected themselves to be part of it. Other than this there was no particular process followed to determine the composition, ensure representativeness or rationalize criteria for participation. Neither can members be presumed to be speaking the voice of other non-member nations or of the broader community of nations.

As an informal grouping, the Group of 20 is qualitatively different from international organizations such as the UN or the World Bank. There is no charter or constitutive document specifying duties and obligations of members, or a stable vision of its purposes and objectives. It does not have a permanent secretariat, so the secretariat functions are performed by the country that holds its presidency in a given year. Even more, the modalities of deliberation, discussion, participation, openness, etc. are ad hoc and highly contingent on decisions of the country in the chair for the year.

At the same time, the G20's composition involves very powerful countries who, acting together, can largely ensure that their agreement is adopted in multilateral organizations where they operate. The political agreements that countries make in the G20 have, therefore, tremendous potential to determine the behavior of those organizations, to the point of displacing or pre-empting formal channels for decisionmaking in them. In fact, there is some evidence that decisions made in the G20 have already begun to do that. For instance, last year, the Group moved to commission plenty of papers from intergovernmental organizations. The papers competed for the time of staff in the organizations with other tasks given by their own political bodies. In several cases, at least, the papers were not even supposed to receive discussion or clearance in the formal organization to which the staff belonged, before being discussed at the G20.

The primary focus of the G20 is implementation of an agenda of reform of international economic policies. They have taken to understand that from that it follows that human rights considerations have no place in their discussions or statements. Nevertheless their actions have significant impacts on the realization and enjoyment of human rights, and the members of the G20 are nation-states that cannot disregard their human rights obligations in any forum, including multilateral economic institutions.

It is, of course, important to mind the distinction drawn between the G20 and formal international organizations. The latter category includes organizations that have an inclusive membership, established agendas and obligations and procedures to ensure a measure of accountability and transparency (e.g. the FAO, ILO , etc).

But, while it is proper that the G20 should not inadvertently assume the status of an institution, let alone one with human rights mandates, its member countries should not try to escape the fact that they have human rights obligations to uphold. Whether they operate in formal organizations or in informal groupings, they are not exempt from upholding their broader obligations and are accountable to them. This should ring especially pertinent considering that they, operating via the G20, establish trends in financial regulation and economic policy that have significant human rights consequences.