2015: a seminal year for human rights and sustainable development?

After years of discussing a “post-2015 development agenda” to replace the Millennium Development Goals, the year 2015 is finally upon us. The first session of intergovernmental negotiations to determine the new agenda kicks off next week, beginning a series of sessions that will culminate in the adoption of the new Sustainable Development Goals in late September.

2014 was brought to a close by another significant input into the process: the ‘Synthesis Report’ of UN Secretary General Ban Ki-moon. The report was tasked with surveying the post-2015 landscape, presenting a compelling vision of what the SDGs should accomplish, and laying out the way forward for Member States to proceed towards an agreement.

In response to the Synthesis Report and in advance of the first negotiation session, the Post-2015 Human Rights Caucus has issued a statement highlighting the positive steps forward outlined in the Synthesis Report that Member States can build on as they move towards an agreement. For instance, the Caucus warmly welcomes the Secretary General’s bold rallying call for a universal, transformational agenda which leaves no one behind, and his unequivocal stance that human rights must be at the core of the new agenda. The agenda must be aligned with existing international law, according to Ban, who furthermore recognizes that the “agenda itself mirrors the broader international human rights framework, including elements of economic, social, cultural, civil and political rights, as well as the right to development”. The Secretary General’s report also clearly signals that the sustainable development goals must be premised on “a new paradigm of accountability”, including robust mechanisms at the national, regional and international levels.

However, the report was also notable for some concerning omissions and questionable framing that obscured certain key priorities for sustainable development and human rights. For instance, gender equality and women’s rights are not acknowledged as essential structural components of sustainable development. Several core preconditions for gender equality – including sexual rights, ending violence against women, redistributing unpaid care work, discrimination against LGBTQI persons, and comprehensive sexuality education – are either omitted entirely or suffer from watered down language. In these and other areas where the Synthesis Report falls short, the Caucus’ statement advises Member States to be guided by other inputs, as well as existing international human rights treaties and international agreements.

As we proceed into the first session of inter-governmental negotiations, the Caucus urges governments to seize the “much-needed opportunity”, as the Secretary-General states, “to integrate the broader UN agenda…including human rights objectives”.

Kate Donald, director of CESR’s Human Rights in Development program, has also published a blog post presenting her own reflections on the Synthesis Report, and how it helps or hinders the chances for a transformative new paradigm of sustainable development. 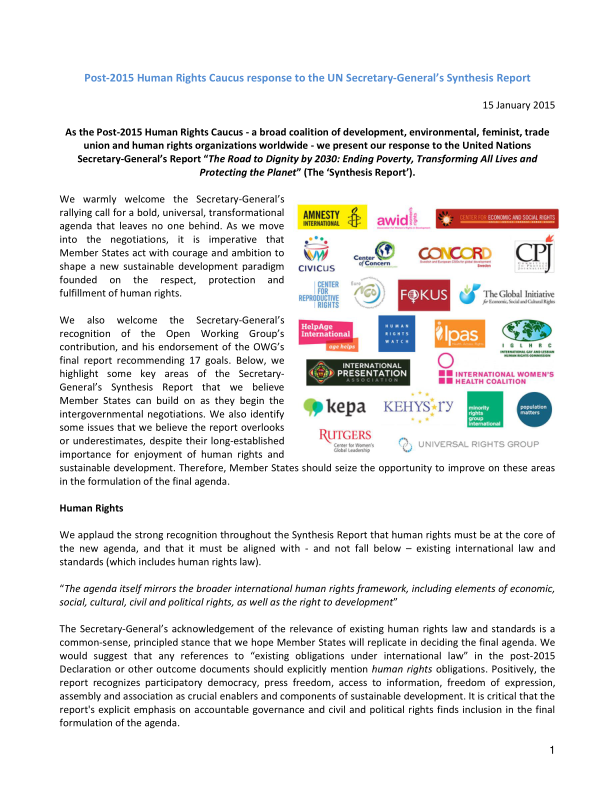