CESR joins call to action on right to safe water

Access to safe drinking water and sanitation is one of the most urgent human rights issues of our time. Although it doesn’t receive the same level of public attention as other forms of deprivation, diseases associated with the lack of access to safe water costs the lives of a staggering 2.2 million people, most of them children under the age of five, in developing countries each year. It is for this reason that CESR, together with 40 other national and international NGOs, are calling on government representatives at this year’s World Water Forum (WWF) to unequivocally support the right to safe water and sanitation.

The Forum, which has been taking place in Marseille this week, is the world’s most important meeting about water and sanitation, and enjoys the participation of over 180 countries. However, a draft Ministerial Declaration to be issued by the WWF fails even to reaffirm existing commitments made by virtually all states at the United Nations level. Given that 6,000 children die of waterborne diseases every day, it is critical that the language of the declaration be strengthened and explicitly support access to safe water as a human right. As things stand, it only commits signatories to implement “human rights obligations relating to access to safe and clean drinking water and sanitation”, thereby leaving room for states to determine individually whether their human rights obligations require them to realize these rights.

Concern over the weakness of the language employed in the declaration has also been voiced by Catarina Albuquerque, the United Nations Special Rapporteur on the right to safe drinking water and sanitation.

It is CESR’s hope that government representatives at the World Water Forum will respond to this call to action by rewording the Ministerial Declaration appropriately. 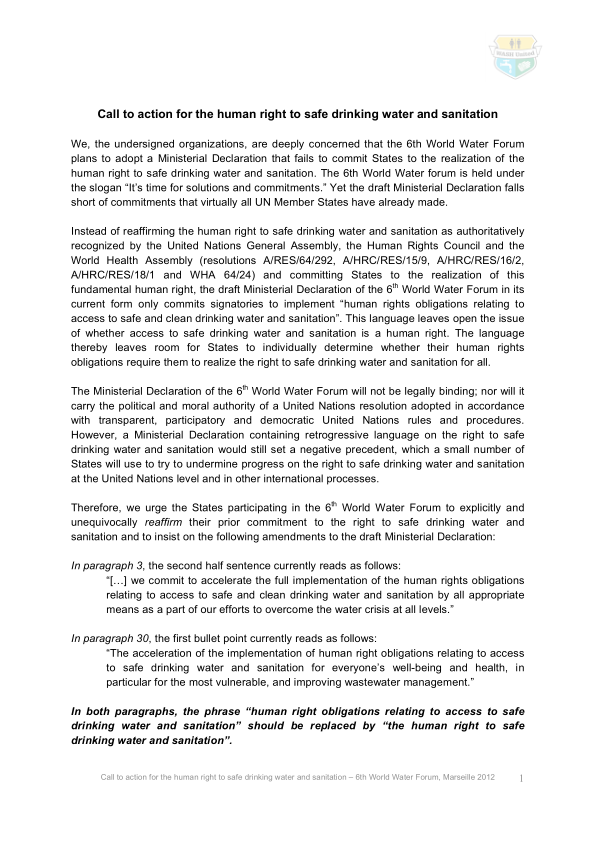