This statement is available in pdf format in English
Esta declaración está disponible en formato pdf en español
Esta declaração está disponível em português
A regional civil society Initiative for Human Rights in Fiscal Policy in Latin America calls on States to undertake broad fiscal redistribution, and on multilateral institutions to free up fiscal space, in order to avoid dire human rights consequences.
Bogotá/New York/Buenos Aires/Mexico/Brasilia, April 23—If countries in Latin America and the Caribbean do not undertake an unprecedented redistributive effort to respond to COVID-19, they may face a profound human rights crisis, says the Initiative for Human Rights Principles in Fiscal Policy (comprised of six human rights organizations and the regional fiscal justice network).
Fiscal policy is a key tool to strengthen healthcare systems and tackle COVID-19, after years of deterioration due to austerity measures. Fiscal policy is also essential to provide economic and social safeguards to make social distancing and quarantine measures viable and humane, and to prevent a deep economic recession.
The Economic Commission for Latin America and the Caribbean (ECLAC) estimates that the region will face its worst economic contraction in history and that, without adequate responses, the number of people living below the poverty line could increase from 185 to 220 million, and people living in extreme poverty from 67.4 to 90 million. The International Labour Organization (ILO) estimates that around 14 million jobs could be lost. Human rights such as the right to housing, education and social security—among others—will also be seriously impacted.
These devastating consequences could be mitigated through the adoption of redistributive and participatory fiscal policies to fund basic elements of welfare states. Such measures should have been adopted long ago in the region, but the pandemic—and similar potential emergencies in the future—make further delays unconscionable. While some measures have already been taken (with substantial differences among countries, ranging from an equivalent of 0.5% to 15% of their GDPs), more robust responses that prioritize the protection of rights are needed. This will require unprecedented investments to strengthen healthcare systems, the adoption of subsidies for small and medium companies to protect jobs, and the implementation of rights-based social protection floors (prioritizing the adoption of a permanent basic income). The measures should also benefit the informal sector, the unemployed, and care providers, and consider the differential impacts along gender, ethnic and racial lines with an intersectional lens.
Measures should also be taken to protect other rights that could be threatened in the current context, such as the rights to housing and to food, through subsidies for utilities, debt reliefs, suspension of evictions, and in-kind transfers. Measures should be designed and implemented considering the situation of specific groups (such as women, who are exposed to higher risk of gender-based violence), and of disadvantaged populations (such as older people and seniors, Indigenous peoples, Afro-descendant communities, peasants, transgender people, migrants, persons with disabilities, and people experiencing homelessness, among others).
It is crucial that all measures are consistent with the human rights framework and with States’ constitutional obligations. Given the disparate impact of the crisis on different groups, and the heavy income restrictions faced by the most affected sectors of the population, measures should be financed through the following sources:
Confronted with the false dilemma of choosing between saving lives and saving the economy, the Initiative for Human Rights Principles in Fiscal Policy argues that the human rights crisis cannot be avoided by relaxing existing containment measures in order to “reopen” the economy; especially if the relaxation of measures is made carelessly and without adequate conditions in place, as is being demanded by some sectors in some countries. Rights protection depends on undertaking deep and structural social protection, financed through progressive reforms to tax systems that leave behind the orthodox views and fiscal dogmas that have worsened the ability of the region to weather the current crisis. No person should be deprived of dignified living conditions while containment measures continue, nor when restrictions are lifted. Economic and social rights must serve as a central tool to tackle a fundamental injustice: the unequal forms in which wealth is appropriated and distributed.
For all these reasons, the organizations that make up the Initiative call on the States of the region to use human rights standards as the basis for their interventions. The organizations call on international and regional financial institutions and other economic actors—such as private and public creditors—to adopt immediate measures to increase fiscal space in Latin America, in order to confront the emergency and achieve a transformative recovery that reduces external vulnerabilities and allows the region to build more sustainable and solidarity-based economies. The Initiative also calls on human rights institutions to monitor the financing and use of resources allocated for this purpose.
We invite other organizations and social movements of the region to join efforts to advance towards fiscal policies that guarantee rights and reduce the inequalities that this crisis has brought even more into the spotlight.
The Initiative for Human Rights Principles in Fiscal Policy in Latin America is comprised of Asociación Civil por la Igualdad y la Justicia (ACIJ); Center for Economic and Social Rights; Centro de Estudios de Derecho, Justicia y Sociedad (Dejusticia); Centro de Estudios Legales y Sociales (CELS); Fundar (Centro de Análisis e Investigación); Instituto de Estudos Socioeconômicos (INESC); Red de Justicia Fiscal de América Latina y el Caribe.
Website: www.derechosypoliticafiscal.org
Email: info@derechosypoliticafiscal.org
Twitter: @DHyPolFiscal 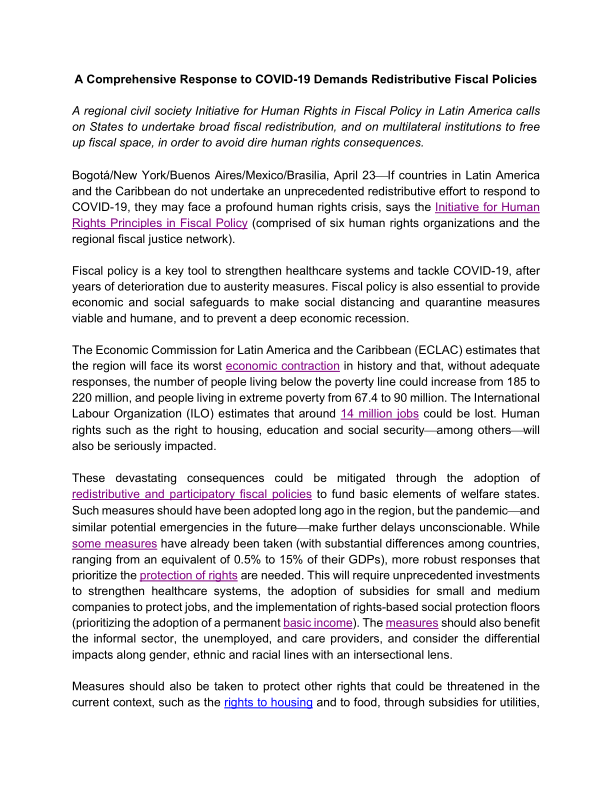 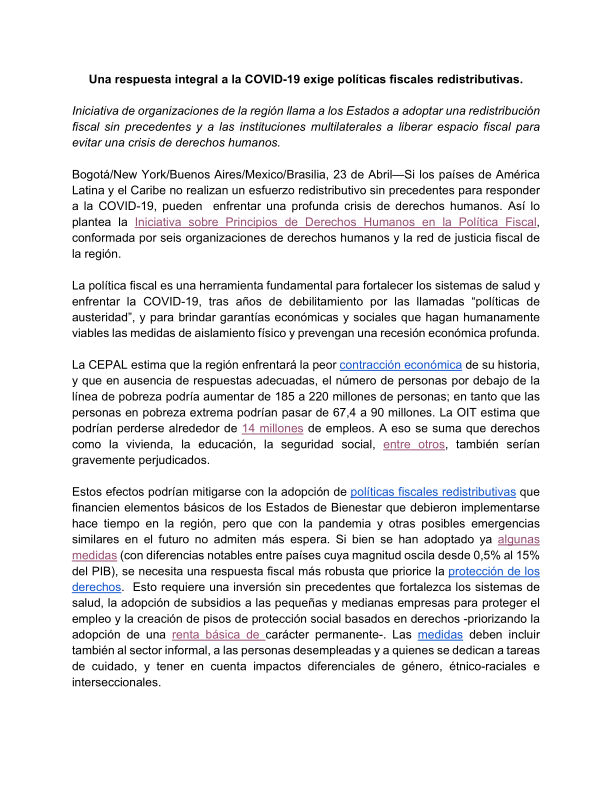 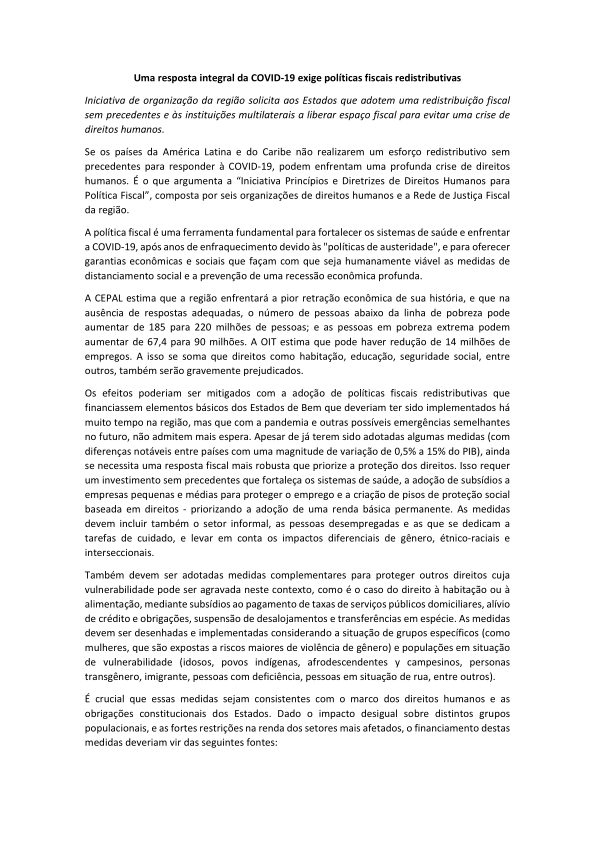