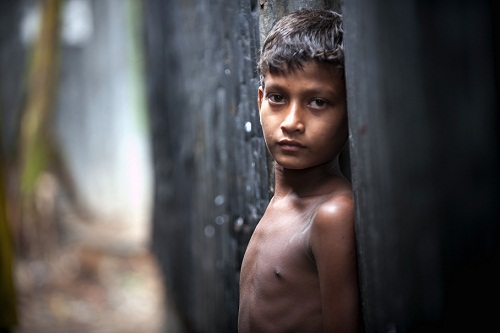 Despite an increase in national income in recent years, Bangladesh has seen a retrogression of basic economic and social rights among its children. More girls than boys are malnourished and children in slums live in great poverty and are less likely to attend school than their urban non-slum and rural counterparts.

Our research suggests that the state is failing to implement policies needed to honor its minimum core obligations to reduce disparities in children's enjoyment of economic, social and culture rights, and to ensure that these rights are realized progressively according to maximum available resources. CESR's factsheet on Bangladesh provides a graphic overview of selected elements of children's human rights to food, health, education, housing and water, seeking to highlight areas where government efforts to realize these rights may be inadequate. It was prepared in light of Bangladesh's appearance before the UN Committee on the Rights of the Child (CRC) in June 2009

The CRC is the body of independent experts that monitors implementation of the Convention on the Rights of the Child.

Part of CRC's 51st session (June 12-25, 2009 in Geneva) focused on the consideration of the state reports submitted by Bangladesh. Documentation related to this meeting can be found here. Committee experts asked the Bangladeshi government questions related to children's economic and social rights, such as:

In light of its consideration of Bangladesh's reports, and the subsequent discussion, the Committee adopted its concluding observations. These list principal subjects of concern along with suggestions and recommendations to the State party:

In light of Bangladesh's appearance before the Committee on the Rights of the Child in May 2009, this factsheet looks at the realization...