Equatorial Guinea has become the richest country, per capita, in sub-Saharan Africa since the discovery of oil and natural gas reserves in the 1990s, yet the majority of its people remain extremely poor. Despite its increased wealth, the realization of the rights to food, health and education has declined. These retrogressions are documented in CESR's statistical analysis of the country's economic and social rights outcomes relative to its resources, and is available in English and Spanish.

According to official UN data, GDP per capita is over US$26,000, yet almost two-thirds of Equatoguineans still live on less than US$1 a day. Access to health and education has deteriorated as the country's economy has boomed. The proportion of children dying before age five has risen in the last 15 years and is now higher than some of the poorest countries in the region. Twenty percent of children under five are chronically malnourished and stunted in their growth (under-height for their age), more than in most neighboring countries. Primary school enrollment rates have fallen sharply since the early 1990s, and fewer than 60 percent of pupils enrolled complete primary school. Girls are only about half as likely as boys to be enrolled in secondary school.

Despite these abysmal indicators and the country's increased resources, government expenditure on health and education is far lower than the sub-Saharan African average. Total health expenditure as a percentage of GDP declined between 1996 and 2005 from 4.0% to 1.6%. Moreover, spending is not directed at essential priorities: Equatorial Guinea gives a lower priority to primary education spending than almost any other country in the region.

Lack of budget transparency is a serious obstacle to holding the government accountable for its use of oil-generated wealth. It fuels concerns that official corruption and corporate collusion are diverting resources away from the realization of the basic rights of the majority of the country's people, as documented in a Human Rights Watch report, "Well Oiled: Oil and Human Rights in Equatorial Guinea."

The government of Equatorial Guinea has attempted to discredit CESR's findings by claiming that the data used in our analysis of the country is "fabricated" and not actually from the UN sources cited, despite the fact that all sources can be verified through the links and references provided in the document. CESR's factsheet analyses the latest publicly available data from the World Bank and UN specialized agencies such as UNICEF and the World Health Organization.

In statements to the press, Presidential spokesperson Miguel Oyono accused both CESR and Human Rights Watch of attempting to blackmail the government and undermine the visit to the country of the Spanish Foreign Minister, Miguel Angel Moratinos. In July 2009, Moratinos led a delegation made up of representatives of Spanish companies and politicians, with the stated aim of strengthening Spain's economic relations with its former colony and encouraging the president, Teodoro Obiang Nguema, to promore greater democracy and political openness.

Equatorial Guinea before the UN Human Rights Council in December 2009

In light of Equatorial Guinea's appearance before the sixth session of the Universal Periodic Review (UPR), CESR contributed a submission on the state of economic and social rights in the country. It focused in particular on Equatorial Guinea's compliance with its obligations in relation to the fulfillment and realization of economic, social and cultural rights. The submission presented and analyzed key indicators relating to the enjoyment of the rights to health, education, food, water and housing, as well as selected indicators of state policy efforts. The Summary of Stakeholders' Information used much of CESR's submission in reporting on the economic and social rights situation in the country.

The Report of the Working Group provides a summary of the proceedings of the UPR review process and the conclusions and recommendations. Based on NGO (including CESR) lobbying of governments before the UPR session, many governments stated their concern with the Equatoguinean government's economic and social rights violations. Canada spoke about the economic and social rights fulfillment not being commensurate with GDP and was concerned about the regression in terms of increased poverty rates. It suggested that health and education should be priorities. Other countries, such as the Netherlands, Brazil, Sweden, Azerbaijan and Norway all mentioned issues to do with using resources to fulfill economic and social rights. Portugal made an especially strong emphasis on progressively realizing rights according to maximum available resources and ensuring non-discriminatory policies.

In March 2010, the government appeared before the UN Human Rights Council to report on how they would follow up the recommendations made by the UPR Working Groups, highlighting those that the country was willing to accept–including many on fulfilling people's economic and social rights–and those that were rejected.

Following this CESR, in collaboration with local partners, undertook a project to enhance the capacity of national human rights activists and NGOs to monitor the fulfilment of economic and social rights in the country. This project was a response to the local need for broader promotion of human rights, including trainings on international human rights law and its supervisory mechanisms. Further, it aimed at strengthening local activists' capacity to participate in the next Equatorial Guinea UPR process, with a particular focus on how to supervise the progress on economic and social rights according to the commitments made by the government during the first review in 2010.

The UN Committee on the Rights of the Child reviewed Equatorial Guinea's state report in September 2004, and issued the following Concluding Observations (aquí en español) on the government's respect, protection and fulfillment of children's human rights.

The UN Committee on the Elimination of Discrimination Against Women reviewed Equatorial Guinea's state report in July 2004, and issued the following Concluding Observations (aquí en español) on the government's respect, protection and fulfillment of women's human rights.

A trail of hope from Geneva to Equatorial Guinea: using the UPR for national level impact

CESR is providing support to Equatoguinean human rights defenders eager to make use of the UPR. 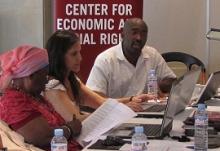 Why UNESCO should just cancel the Obiang life sciences prize

"UNESCO is allowing itself to be used to burnish the unsavory reputation of a cruel and corrupt despot." --Tutu Alicante, EG Justice

CESR individual submission to the OHCHR on the occasion of the sixth session of the Universal Periodic Review, December 2009.

This 2009 factsheet focuses on the rights to health, education, water and sanitation.