Coming at the confluence of the financial, fuel and food crises, the global economic crisis has devastated lives and livelihoods across the world. And it has rapidly turned into a human rights crisis. 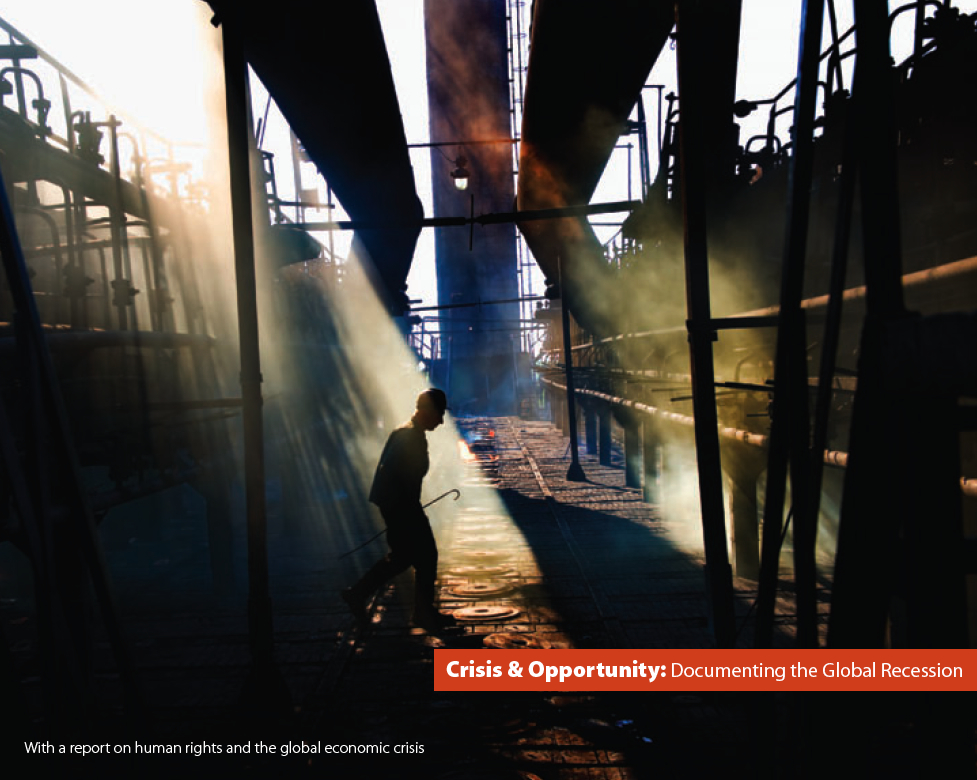 We at the Center for Economic and Social Rights have examined and analyzed the human rights dimensions of this crisis. The ability to document the crisis through photography, however, greatly aids our understanding of it, and the work by photographers presented here is at once poetic and grounded in reality. This new publication accompanying a photo exhibit showcases the work of photographers who focused on documenting the crisis visually.

The effects of the crisis have tended to be discussed in terms of faceless economic statistics on declining economic growth and rising unemployment. Missing from much of the coverage is the harmful impact of the crisis on individual human lives and dignity. We partnered with SocialDocumentary.net because through photography we can bring home and understand better the human consequences of the crisis. The images in this collection remind us of the real people behind the statistics and tell a story of dignity and resilience in the face of extreme hardship.

Rights in Times of Crisis

The loss of lives and livelihoods inflicted by the crisis is often presented as a tragic but inevitable casualty of uncontrollable market forces. A human rights perspective challenges this complacency; these devastating consequences are not inevitable, nor should they be acceptable. It demands accountability for the human wrongdoings which gave rise to the crisis, and redress for the human rights violations they caused.

Every year during this crisis, as many as 400,000 more children will die before they reach their fifth birthday simply because their families cannot afford food or basic medical care for preventable diseases. World hunger reached an historic high in 2009 with more than one billion people going hungry every day, according to the UN's food and agriculture agency. This means that one in six people are too poor to eat adequately. Chronic malnutrition will affect children's physical and intellectual development for the rest of their lives. The crisis has also had a direct impact on children's right to education, as children are pulled out of work to help support their families, though children who leave school early will never catch up.

Bankruptcies and economic retrenchments mean that the increase in global unemployment as a direct result of the economic crisis was expected to reach 38 million by the end of 2009. The right to decent work has been under massive threat as companies radically reduce costs, ramping down wages and allowing working conditions to become more hazardous. At the same time, the housing crisis has left many people without homes or shelters. The sub-prime mortgage crisis has left many people facing foreclosure, some of them victims of fraud and abusive practices by mortgage brokers. In developing countries, the number of people living in slums has risen, and millions more slum dwellers face lack of access to clean water and sanitation, and increased insecurity of tenure.

While trillions of dollars were made available for bailing out the banking sector, this has not been matched by funds to support those who are suffering most from the crisis. As millions of people fall into desperate circumstances as a result of a global crisis not of their own making, the provision of social safety nets is limited and shrinking, depriving people of their right to social security. As taxes, exports, foreign investment and other sources of revenue decline, government budgets are falling, with spending on social programs likely to be slashed first. Governments are cutting back on social services and social safety nets just at the time they are most needed to guarantee minimum levels of economic and social rights essential for survival and human dignity, including the rights to health, food, housing and education.

What Needs to Change

Despite the human rights consequences of the crisis, governments have been loathe to recognize their obligations in their responses to the crisis. Indeed, human rights principles have been studiously avoided in the international declarations and commitments made by states since the crisis.

The deterioration in the global economy is no justification for states to compromise on their fundamental human rights obligations. In such times, it is all the more important that states guarantee minimum essential levels of these rights; take deliberate measures targeted at the most vulnerable; avoid measures that are retrogressive or discriminatory; and implement fiscal policies that ensure the progressive realization of the rights of the whole population through the equitable distribution of available resources. Richer states have an obligation to provide appropriate levels of development assistance to enable developing states to guarantee delivery of core services such as health, education, and sanitation.

The economic crisis is an opportunity as well as a threat to human rights: an opportunity to rethink the values which should underpin our economic order and to create more democratic and accountable institutions of economic governance. Around the world, ordinary people angered by the inequities and injustices laid bare by the crisis have been mobilizing at the local, national and international level. They are demanding accountability from their leaders for what they are doing to end the assault on human dignity so powerfully illustrated in the stories in this publication.