This factsheet is available in PDF format here
The Egypt Social Progress Indicators (ESPI) Factsheet on Economic Policy demonstrates that the Egyptian economy has significant room for improvement when it comes to directing economic policy priorities towards improving socioeconomic wellbeing. Specifically, raising revenue in a more equitable manner could lead to a better distribution of resources and opportunities, contributing towards improved socioeconomic wellbeing for all.
Poverty and inequality are serious challenges for Egypt. Over 26 million people—approximately one in four—live below the national poverty line, based on the most recent official figures. Egypt was the third most unequal country in the world in 2017, measured by its wealth gap. Social protection coverage is still very limited, with cash transfer programs covering less than half of the population living in poverty.
All this is unsurprising given the deficiencies in the tax system and government revenue collection. Tax revenue was only 13% of GDP in the last financial year (low compared to other Lower Middle Income Countries), with corporate tax making up only 10% of total tax revenue. Other structural problems in the Egyptian economy, including a high debt servicing ratio and risk of natural resource dependence, present further challenges. Greater transparency, participation, and accountability would certainly strengthen economic policymaking in Egypt, as demonstrated by its weak overall scores on the Open Budget Index and the Corruption Perception Index.
The data showcased in the factsheet was derived with ESPI (Egypt Social Progress Indicators), a new metric developed jointly by CESR and its partners in Egypt, offering a more multidimensional view of the socioeconomic situation in Egypt and its human impacts. Economic Policy is among six topics covered, including health; education; urbanization; food, water, and agricultural land; and a cross-cutting gender analysis.  It uses a four-color scale, to score progress against benchmarks informed by national and international development targets, as well as human rights commitments, including recommendations from human rights mechanisms which Egypt has taken on in recent years. 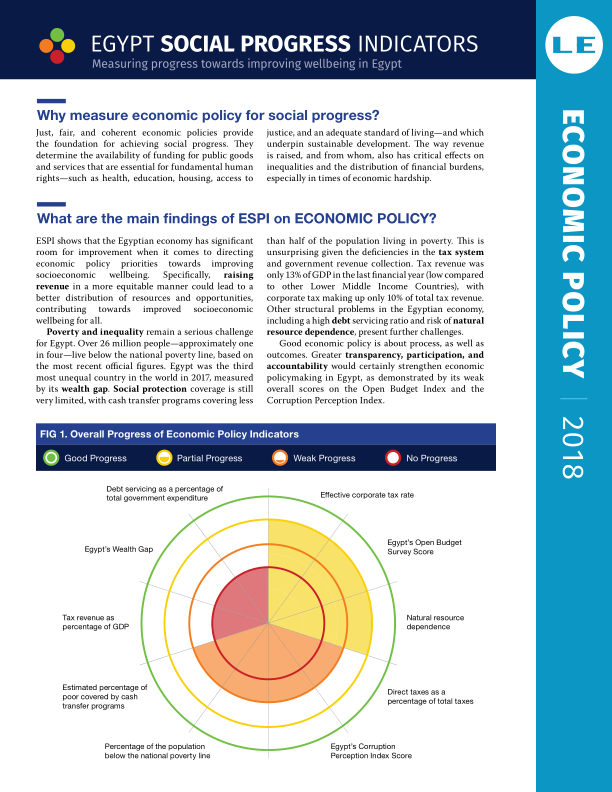