This factsheet is available in PDF format here
The Egypt Social Progress Indicators (ESPI) on Health demonstrate that despite Egypt’s general progress on health outcomes, gaps persist that reflect entrenched patterns of social and economic disparity. With declining public spending, and the increasing costs of health services, the sustainability of the latest achievements are potentially at risk.
Although Egypt is performing well on key international outcome indicators—such as child and maternal mortality rates—in comparison to peer countries, outcome gaps reflect entrenched patterns of social and economic inequalities. Declining public spending reveals Egypt’s failure to meet its constitutional healthcare obligations, while the increasing costs of health services impede reaching its Vision 2030 targets.
Egypt’s  maternal mortality rate declined to 33 deaths per 100,000 live births, surpassing its 2020 target. However, available data on maternal care services show significant gaps in access to care between the rich and the poor. The mortality rate among children under five has also been in steady decline since 1960. However, data suggests that the probability of children under five years of age dying is more than 2 times greater if a child is from the poorest quintile rather than the richest. Under-5 mortality is also much higher in rural compared to urban areas, and in Upper Egypt compared to Lower Egypt.
Research also shows that almost half of Egyptian families live without any sort of health insurance coverage whatsoever, with extremely low coverage for women and the very poor.
The data showcased in the factsheet was derived with ESPI (Egypt Social Progress Indicators), a new metric developed jointly by CESR and its partners in Egypt, offering a more multidimensional view of the socioeconomic situation in Egypt and its human impacts. Health is among six topics covered, including urbanization; education; labor; food, water, and agricultural land; and economic policy.  It uses a four-color scale, to score progress against benchmarks informed by national and international development targets, as well as human rights commitments, including recommendations from human rights mechanisms which Egypt has taken on in recent years. 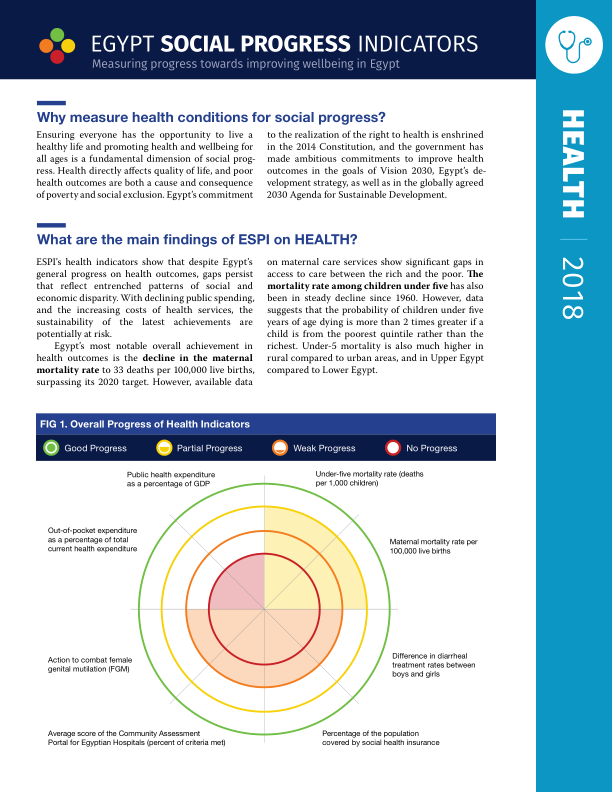