Falling at the last hurdle? Human rights and accountability in the SDGs 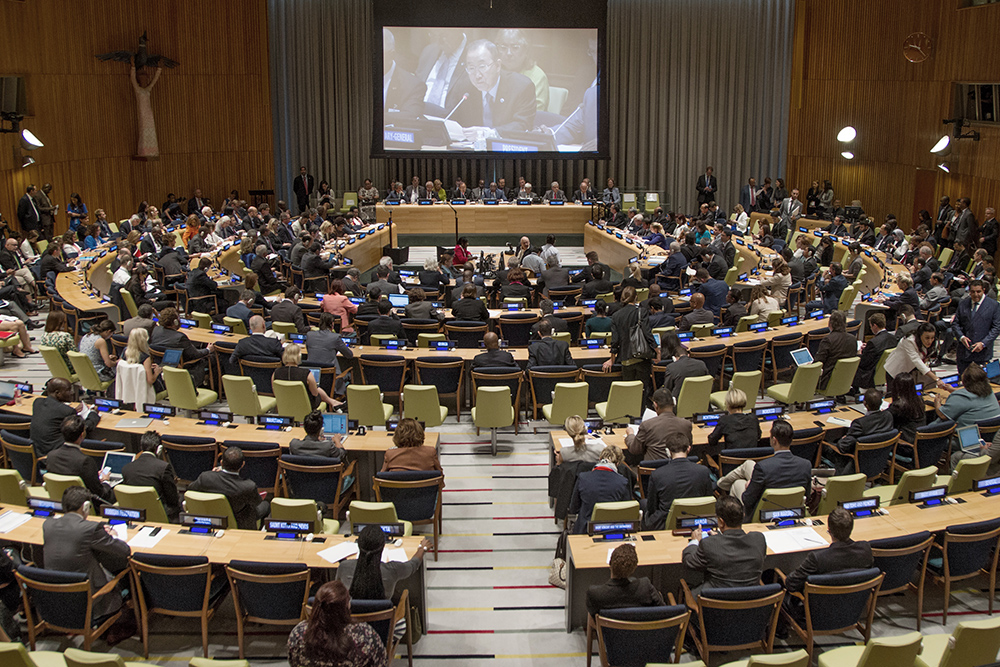 The post-2015 negotiations have finally moved into the endgame, with the release in early June of the ‘zero draft’ outcome document. This is the co-facilitators’ first attempt at the final package that will be adopted by world leaders at the UN Summit in September. It will consist of four components: a Declaration, the Sustainable Development Goals and their accompanying targets, a description of the Means of Implementation for the goals, and an outline for how States will ‘Follow-up and Review’ progress towards the goals.

Among the members of the Post-2015 Human Rights Caucus, there is striking consensus on the basic elements of the zero draft that should be strengthened:

Happily, there is some eloquent human rights language in the draft Declaration text.  However, human rights are deployed mostly as a rhetorical flourish rather than being framed as legally binding commitments and standards which should guide the implementation of the agenda. The Millennium Declaration provides a good model in this regard, and it would be sad indeed to see a political declaration on development in 2015 backsliding from the words used in 2000.

2. Rule out discrimination on any ground

The zero draft states that the agenda will work to ensure that rights are “enjoyed by all without discrimination on grounds of race, colour, sex, language, religion, culture, migratory status, political or other opinion, national or social origin, economic situation, birth or disability.” This ‘closed’ list is not consistent with agreed language on discrimination in human rights standards and elsewhere, and indeed is even less comprehensive than the language in the Open Working Group outcome document. For example, discrimination on grounds of age, sexual orientation and gender identity are conspicuously excluded in this formulation, despite the visibility civil society groups have given these issues in the post-2015 context. Discrimination on any ground is unacceptable, and the post-2015 Declaration must recognize this by naming other relevant grounds of discrimination (at the least, reverting to the list used by the Open Working Group which is more comprehensive despite important deficiencies) and ensuring that the list is ‘open’ - ending with the words ‘or other status’.

3. A robust framework for accountability in the ‘follow-up and review’ section

Civil society has been consistent in demanding that a meaningful and participatory monitoring and accountability architecture is an essential component of the post-2015 agenda, necessary for more effective and empowering implementation that can truly ‘leave no one behind’. Unfortunately, the zero draft does not deliver a clear or ambitious vision on this front. CESR and many other members of the Human Rights Caucus and civil society have responded with calls for:

(a) Corporate accountability: the role of the private sector in financing the agenda is uncritically endorsed in the zero draft, but with no reference to any regulation, monitoring or accountability as to the impacts of their actions and activities.

(c) Fleshing out the guiding principles: the ‘principles’ outlined to guide the follow-up and review don’t set a high bar. Important principles like universality and transparency get very short shrift, and adjectives like ‘participatory’ and ‘inclusive’ are used without any real definition or standard. Here, human rights principles and standards will be crucial – for example, national level reviews are very unlikely to be ‘robust’ or ‘inclusive’ if the rights to freedom of speech, freedom of assembly and association are not upheld. Even something that has seemed like a fairly basic and non-controversial demand - official channels for civil society ‘shadow’ or alternative reports (at national and international levels) -  is only tentatively suggested.

Unfortunately, the negotiations last week demonstrated very little appetite for improving the draft along these lines. Although several Member States spoke favourably about retaining or strengthening the human rights references, the African Group criticized the ‘disproportionate emphasis’ on human rights in the current draft, insisting that human rights have their own pillar at the UN and therefore should not be mixed up in a sustainable development agenda. After several decades of human rights ‘mainstreaming’ and the human rights-based approach to development, it is profoundly troubling that we still hear these kinds of statements in the halls of the UN.

As for follow-up and review, a majority of Member States insisted that the zero draft was ‘too prescriptive’, which is perplexing given the draft only rather vaguely outlines a review architecture that would likely fall far short of what is required. (By way of example, it includes only two sentences on national review, hedged with phrases like ‘we encourage’ and ‘Member States could…’.) Frustratingly, the aversion to anything concrete seems partially designed to kick the can down the road indefinitely. If the September outcome doesn’t include a clear vision as to the who, where, what and how of post-2015 monitoring and review, it is difficult to understand where and by who these decisions will be made – especially given that several states objected to the co-facilitators’ idea of asking the UN Secretary-General to provide guidelines. They insisted it should be a decision taken in the intergovernmental space, while failing to use the intergovernmental space provided to them to agree or propose anything clear or workable.

The 2015 High Level Political Forum is now underway at the UN, which from next year onwards is envisaged as the ‘apex’ of the SDG monitoring and review system. It seems unlikely to be able to fulfil such a role in a meaningful way unless real political will and resources are devoted towards that end. Certainly, the HLPF ‘roundtables’ this week don’t offer much promise of reaching decision on a clearer mandate and working method.

The UN, its Member States and civil society have expended unprecedented energy and resources on shaping and deciding this agenda. We must fervently hope that the lack of ambition and political will around review and monitoring signals only a failure of imagination rather than a corresponding (mal)intention to simply neglect the goals and targets as aspirational but ultimately meaningless words on paper. Nevertheless, the lack of robust monitoring and clear lines of accountability will inevitably weaken the efficacy and equity of implementation. For those Member States who want to listen and want to avoid this profoundly wasteful outcome, there are plenty of imaginative, constructive proposals out there for them to be inspired by.