G-20 and financial regulation: what's at stake for economic and social rights? 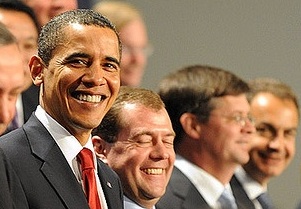 It’s time for the self-selected rulers of the economic and financial universe to meet once again, this time in Cannes, France, to debate amongst other things financial regulation. So what’s at stake for economic and social rights?

In the midst of growing public resistance to rising inequality and an economic recovery biased toward the financial elite, the Group of 20 governments will meet later this week to thrash out several issues of fundamental importance to economic and social rights, perhaps most importantly financial regulation. As part of our ongoing efforts to defend against austerity-driven cutbacks and promote human rights-centered economic policy alternatives, my organization the Center for Economic and Social Rights (CESR) has joined the Center of Concern, Social Watch, CIVICUS and over 180 other social justice organizations from 54 countries to urge G-20 governments to meet their legal obligations to respect, protect and fulfill human rights by endorsing human rights-centered stimuli measures, preventing speculative activity that undermines the enjoyment of human rights, and preventing future financial collapse from harming public resources needed for human rights fulfillment. As part of their human rights duties, G-20 governments should also ensure financial institutions pay for the human rights costs of the crisis, and cooperate in increasing transparency and mutual accountability in the raising of revenue.

The global recovery so feted six months ago is now teetering, if indeed it ever really stood on its own feet. As we approach the brink of another global recession - this time driven largely by fiscal austerity policies and continuing financial instability  - peoples’ access to such basic rights as food, clean water, employment, affordable housing, quality education, social security, and a decent retirement - all of which are already under severe strain - are facing an ominous future. Participatory, transparent, accountable and non-discriminatory economic stimulus measures, on the other hand, can boost demand for goods and services (and thus economic activity) by putting resources into the pockets of people who have no choice but to spend them because of the immediate economic and social deprivations they face. In restoring economic activity (and thus revenue), stimulus measures can also provide the conditions to later pay down any unsustainable public deficits, while also contributing to the building of social, physical and human assets which are the pillars of a productive economy. And the options available to G-20 governments are not hard to find. They include gender- and environmentally-sensitive public infrastructure programs, transformational universal social protection systems, debt restructuring programs to relieve people of onerous housing or student debt burdens, and measures to increase the disposable income of the poor.

Since the financial crisis, prices in certain commodities - oil and food in particular - have become more and more volatile. As a result, governments and the people they work for have been facing serious economic and social rights challenges, as more and more people are driven into hunger and malnutrition, thus eroding even further the prospect of achieving the MDGs by 2015. The 2008 food crisis, for example, was driven to a large extent by opportunistic commodity trading. The question that begs to be answered, therefore, is from whence has this volatility come? Study after study after study have shown that speculation in commodity derivative markets by globally-significant financial institutions like Goldman Sachs is a significant cause of this rights-threatening volatility. Even the UN Special Rapporteur on the Right to Food has attested to the links. While the US has taken some tentative regulatory steps to lightly reign in this speculation, a concerted global approach is needed. G-20 governments can make a start on meeting their obligations to prevent rights infringements stemming from financial speculation by bringing over–the-counter derivatives to public exchanges, establishing meaningful position limits on commodity derivatives, setting up of circuit-breakers, compulsory delivery or altogether banning certain types of derivatives trading in exchanges under their jurisdiction.

Which are too systemically important to fail: banks or human rights?

Over four years after the deepest financial crisis in 50 years, governments - and in particular the US administration - are no closer to guaranteeing that financial institutions will not pose a repeated threat to the global economic system. Will governments once again be forced to bail out banks with public funding at the expense of human rights? Large and complex financial firms, some of them operating in dozens of jurisdictions, have successfully resisted calls to reduce their complexity or size. They are able to profit from the tax and regulatory arbitrage that such a position makes possible, while their intricacy and enormity limits the chance they can be successfully resolved without disrupting vital banking activities in the event of a collapse.

This situation represents a tragedy of the highest order, and is an offense to governments’ legal obligations to take legislative and other steps to prevent and protect against foreseeable systemic human rights infringements by the financial sector. In order to fulfill their duty to protect human rights by preventing further systemic risks, the G-20 governments must undertake measures to reduce the size and complexity of systemically important institutions. This would mean breaking up large firms through direct regulatory intervention, if necessary. Banks cannot be allowed to gamble other peoples’ life-savings away, and so proprietary trading must be firmly separated from traditional banking services.

Governments must make a simple choice. Which are too systemically important to fail: individual private banks or fundamental human rights guarantees?

Like much in the era of liberalization and privatization, governments continue to rely on banks themselves to monitor and police their own capital requirements, in keeping with a model that still holds sway under Basel III’s new global regulatory standard on bank capital adequacy. The regulatory blind-eye afforded to banks, enabling them to hide the true extent of their risks (both to themselves and the global economy), was a significant contributing factor in the 2007 financial crisis which reeked havoc upon human rights worldwide, causing over 400,000 deaths of children in 2009.

Discipline and human rights protection can and must be instilled. In the short to medium term, governments should see regulation of banking services as one essential tool to enhance enjoyment of human rights for all. Instead of giving breaks to manipulative private financial institutions, governments should use regulatory tools to ensure substantive financial equality by protecting the poor and disadvantaged, and, where necessary, allowing for direct state engagement in the provision of banking services.

In the long-term, governments are going to have to replace the existing Basel III requirements with a framework for banking regulation that fully recognizes the duty of states to prevent, protect against and provide effective remedy for human rights infringements caused by irresponsible private financial activity. Stronger capital requirements will no doubt eat into the record profits of the financial sector, and so we can expect them to continue to fight and even blackmail everyday people by withdrawing credit from the economy. Nevertheless, there is little justification for their grievances when these institutions continue to enjoy record profits, pay record bonuses, and claim to operate on a highly efficient basis due to their artificially large size.

Ask any government why it’s failing to live up to its legal commitments to fulfill the human rights to health, education, social security, work, or any other economic or social right, and they’ll likely tell you they’re broke. Yet, sources of financing are abundant. Governments are in fact obliged to expand their fiscal space under the International Covenant on Economic, Social and Cultural Rights in order to deploy the “maximum of their available resources” either domestically or through international cooperation to fulfill economic and social rights. What’s more, this obligation does not apply only to the resources under their command now; it also considers those resources which can come under their command in the future via more progressive taxation or financial regulatory policy, for example.

Unfortunately, quite the contrary has occurred over the last three decades, as freedom of capital and investment has generally led to more indirect and regressive tax policies which by definition disproportionately affect poorer and middle-income households. Instead of being held financially accountable for their role in the ongoing financial crisis, governments have for the most part failed to take an obvious first step by making banking and investment institutions and the rich pay their fair share. A once-in-a-generation deal on financial transaction taxes supported by Germany and France could raise substantial sums for desperately under-resourced economic and social rights programs, if it weren’t for the United States, Canada and surprisingly India blocking it. Illicit financial flows - estimated to add up to $1-1.6 trillion per year (more than 10 times worldwide foreign aid) - meanwhile continue to starve governments of essential sources of funding. Those states which facilitate tax evasion and corporate tax holidays, house tax havens, enable secrecy jurisdictions or are otherwise complicit with such illicit cross-border flows should live up to their obligations to cooperate internationally by putting an end to actions or omissions which prevent governments from raising the resources needed to fulfill their human rights obligations and get the economy back on its feet again.

The G-20 countries must acknowledge their responsibility to protect people against the vagaries of an out-of-control financial system, and act before it’s too late.

The views expressed in this blog are those of the author and do not necessarily reflect the official position of CESR. 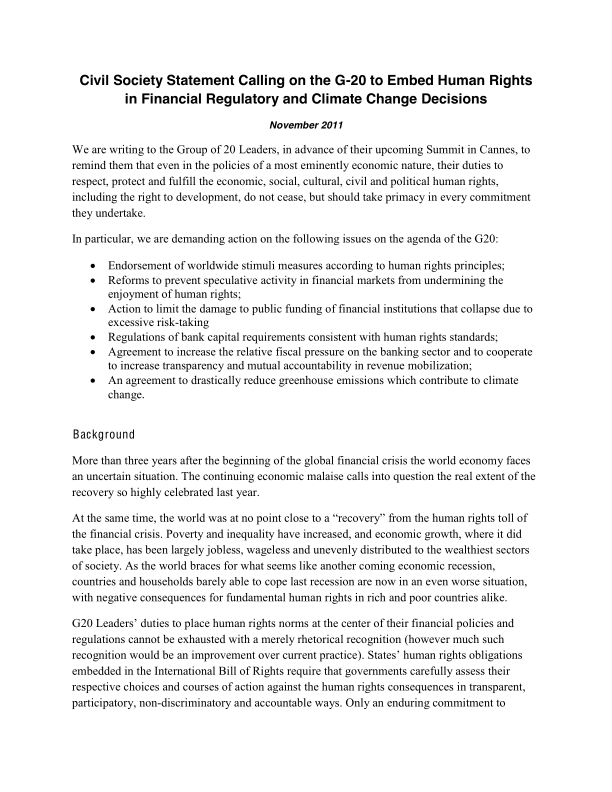