Gaza's humanitarian crisis: what comes next?

"Nowhere in the world does humanitarian assistance alone make up for the denial of dignity and rights." These words, spoken by the Commissioner-General of the United Nations Relief and Works Agency for Palestine Refugees (UNRWA), provoke deep reflection about how to grapple with the formidable challenges that will face Gaza in the coming months. 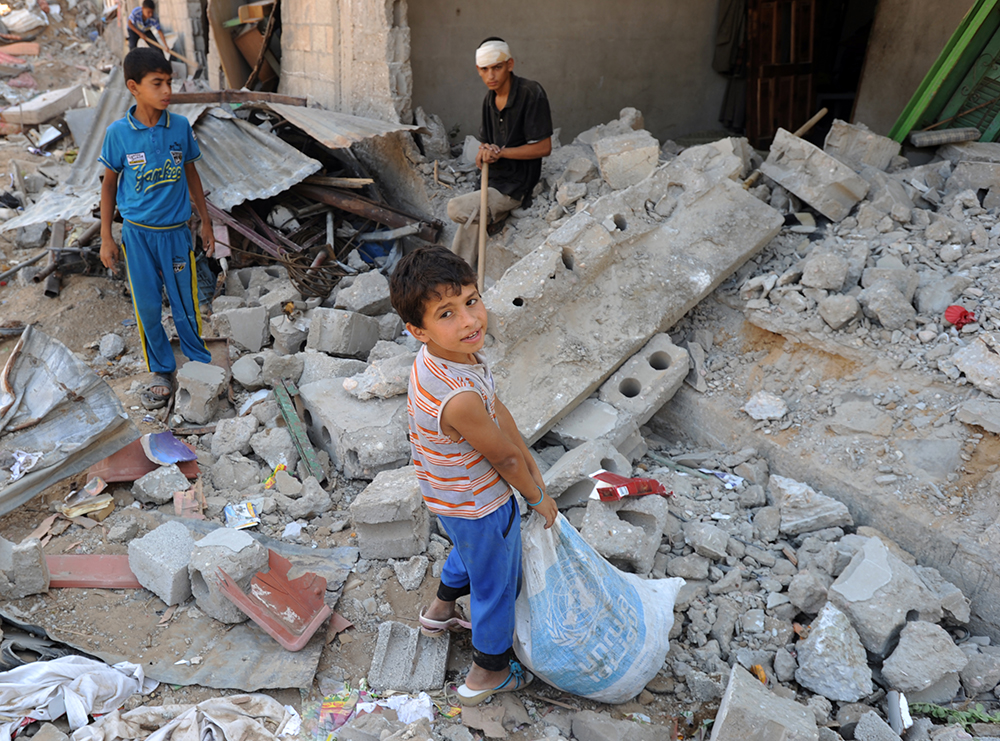 The announcement of a long-term ceasefire on Monday draws to a close seven weeks of violence. Yet the staggeringly high cost of the war is just starting to become visible. Not only is the death toll - approximately 2,100 Palestinians and 71 Israelis - notably higher than previous military operations, the cumulative destruction of civilian infrastructure has been unprecedented. Much of the damage from previous operations in 2008/9 and 2012 remains unaddressed. On top of that, economic, social, and political conditions in Gaza before the recent military operation were at their worst in decades, a result of the blockade imposed by Israel since 2007 and the closure of tunnels by Egypt in the past year.

Gaza's 1.8 million residents face conditions of destitution. Some 80% of them are refugees, half are under the age of 18 and 70% are women and children. Latest estimates indicate that 40% of the population is unemployed, 80% lives below the poverty line, 60% is food insecure, and four in five are dependent on aid.  In this context, the impact of the military operation on the economic and social rights of the people of Gaza has been truly devastating. Oxfam tweeted that the extent of destruction was the worst they'd seen in nearly 20 years of working in Gaza. A quick stocktaking confirms this:

Speculation about the scale of the reconstruction efforts needed in Gaza is already beginning. Palestinian officials estimate that rebuilding could cost $6 billion, while UNRWA has said it would take 15 years or more to rebuild if the current regime were not relaxed.  There have been talks of a donor conference being planned by Norway and Egypt for September. Although opinions about how to move forward will no doubt vary, there is a sense that returning to the way things were is now unacceptable.  Resolving the underlying issues at stake in Gaza is now more urgent than ever.

Complying with international human rights law is a starting point for this undertaking. As the process of repairing homes, schools, hospitals, electricity and water systems begins again - for the third time in six years - the people of Gaza will have particular needs which call for specific protection and assistance.

Ending the Blockade on Gaza

A crucial and immediate step will be the lifting of the seven-year blockade on Gaza. This policy has led to severe deterioration and retrogression in the realization of economic, social and cultural rights in the territory. The current ceasefire eases but not lifts Israeli restrictions on travel and trade, allowing construction materials and humanitarian aid to enter Gaza in large quantities for a major rebuilding effort, however.

The socio-economic devastation caused by Israel's blockade has been well documented.  For example, the most recent report of the Special Rapporteur on the situation of human rights in the Palestinian territories notes the following: Curbing the availability of fuel at affordable prices in Gaza has led to severe power shortages, resulting in shutdowns of water and sanitation systems and disruptions to health services. Restricting access, often with excessive force, to areas of the sea and on land, has profoundly affected the lives of Palestinian fishermen and agricultural farmers and their households. Severe limitations on movement into and out of Gaza have had adverse impacts on the rights of Palestinians in Gaza to education, health and work. In addition, severe restrictions on exports and limitations on imports accentuate the impoverished conditions that prevail in Gaza.

Continuing the blockade after the end of Operation Protective Edge would cripple efforts to rebuild Gaza's economy in the wake of this most recent round of violence, imprisoning its residents in perpetual aid dependency. Actively preventing reconstruction efforts - for example by preventing the entry of materials needed to rehabilitate hospitals or to repair Gaza's only power plant - amounts to collective punishment in violation of both international human rights law and humanitarian law. It has been reported that donors, led by Norway, are making the relaxation of the blockade a condition of aid, which is an encouraging sign.

Protecting rights in relief and reconstruction

Of course, the Israeli Government isn't the only actor with human rights obligations in this context. It is crucial that the human rights of the people of Gaza are respected by all competent authorities working in the territory, including the new national unity government, humanitarian agencies and NGOs, and international donors. If relief and reconstruction in Gaza is not based on  human rights, there is a risk that the focus will be too narrow and factors important for meaningful and sustainable recovery will be overlooked. Three key human rights principles are worth highlighting:

First, the principle of non-discrimination and equality must be upheld. In practice, this means that humanitarian action should be based on assessed need and provided to all persons affected without adverse distinction of any kind. Measures should also be taken to grant priority access to such vulnerable groups as minorities, single-headed households, older persons, people with disabilities, and separated children.

Second, the meaningful participation of rights holders must be ensured. For reasons of perceived efficiency, there can be a tendency to centralize decision-making in relief and reconstruction efforts. Those affected, and in particular those displaced, can find themselves excluded from decisions on matters central to their daily lives. Not including Gaza-based representatives in reconstruction planning has been a major error made by donors in the past.

Third, transparency and accountability must be institutionalized in the reconstruction process. All relevant budgetary information should be public; so as to allow civil society and the independent human rights commission to monitor the reconstruction effort. Following Operation Cast Lead in 2008/9 , $14 billion in pledges were made. Yet the dire situation in Gaza today, in which infrastructure and people still suffer from the damage inflicted in previous military operations, raises questions as to what proportion of the funds was ever received, and how and where those resources were disbursed. In fact, to this day, there has been no comprehensive accounting of these funds, according to Omar Shaban of the independent Gaza-based think tank Palthink.

Ensuring accountability for violations of economic, social and cultural rights

In late July, the United Nations Human Rights Council passed Resolution S-21/1 establishing an independent commission of inquiry to investigate all violations of international humanitarian and human rights law associated with military operations conducted since 13 June 2014, particularly in Gaza. The recently appointed three-person panel will report to the Council in March 2015. The last such mission - led by Richard Goldstone in 2009 - examined the violations of economic, social and cultural rights arising in the context of Operation Cast Lead.  The current commission of inquiry should also give due weight to these rights.

Just as important as the findings of the commission, will be the steps taken to act on them. The 2009 mission was "struck by the repeated comment of Palestinian victims, human rights defenders, civil society interlocutors and officials that they hoped that this would be the last investigative mission of its kind, because action for justice would follow from it". One of the report's conclusions is that failures of accountability reinforce impunity. Its calls for credible, independent investigations into the violations documented were never implemented.

A reconstruction approach that respects, protects and fulfills the rights of those affected by the military operation can help to create the conditions needed for brokering a sustainable solution to the ongoing conflict and securing a life in peace and dignity for the Palestinian people. Ending the blockade, protecting rights in Gaza's reconstruction, and ensuring accountability for the full range of violations that have occurred during the most recent crisis, including economic, social and cultural rights, are three concrete ways of pursuing such an objective.

CESR is currently partnering with Palestine's Independent Commission on Human Rights (ICHR), an official body mandated to protect and promote human rights in accordance with the Palestinian Basic Law and the international principles of human rights.  This collaboration, facilitated through a joint initiative with the Asia Pacific Forum of National Human Rights Institutions, seeks to strengthen the capacity of the Commission to monitor economic and social rights.