'The global partnership for development': tackling the accountability deficit

In order for the post-2015 agenda to be rights-realizing and effective, it will need to include a meaningful recognition of globalization and the importance of global-level actions, governance, systems and institutions. The potential of actions or omissions in this arena to severely undermine efforts at national levels is just too stark. This is long overdue, given that the Millennium Declaration posited “the central challenge we face today is to ensure that globalization becomes a positive force for all the world’s people.”

Unfortunately, since 2000 the ‘long crisis of globalization’ has only deepened, manifested in economic, social and ecological crises including financial shocks and austerity; deepening inequality; and rampant environmental degradation and climate change. All of these have had a severely detrimental effect on human rights enjoyment, with the poorest and most socially excluded people both within and across countries suffering most.

This week, Member States at the United Nations HQ in New York have been discussing how the post-2015 sustainable development agenda will be implemented and, in particular, financed. This is a very big question indeed, given that the SDGs are likely to require resources of over a trillion dollars per year. It is a divisive issue and the political crux of the entire post-2015 agenda: developing countries (134 of which form the ‘G77 plus China’ bloc) are unlikely to commit to implementation unless there are meaningful financial commitments on the table from the richer countries. The legacy of the Millennium Development Goals is in some ways a bitter one: low-income countries feeling that the MDGs left all the hard work to them, while the wealthy countries were not obliged to cut poverty in their own countries, nor were they held to their commitments to provide funds to the developing world and ensure a global policy environment conducive to development. 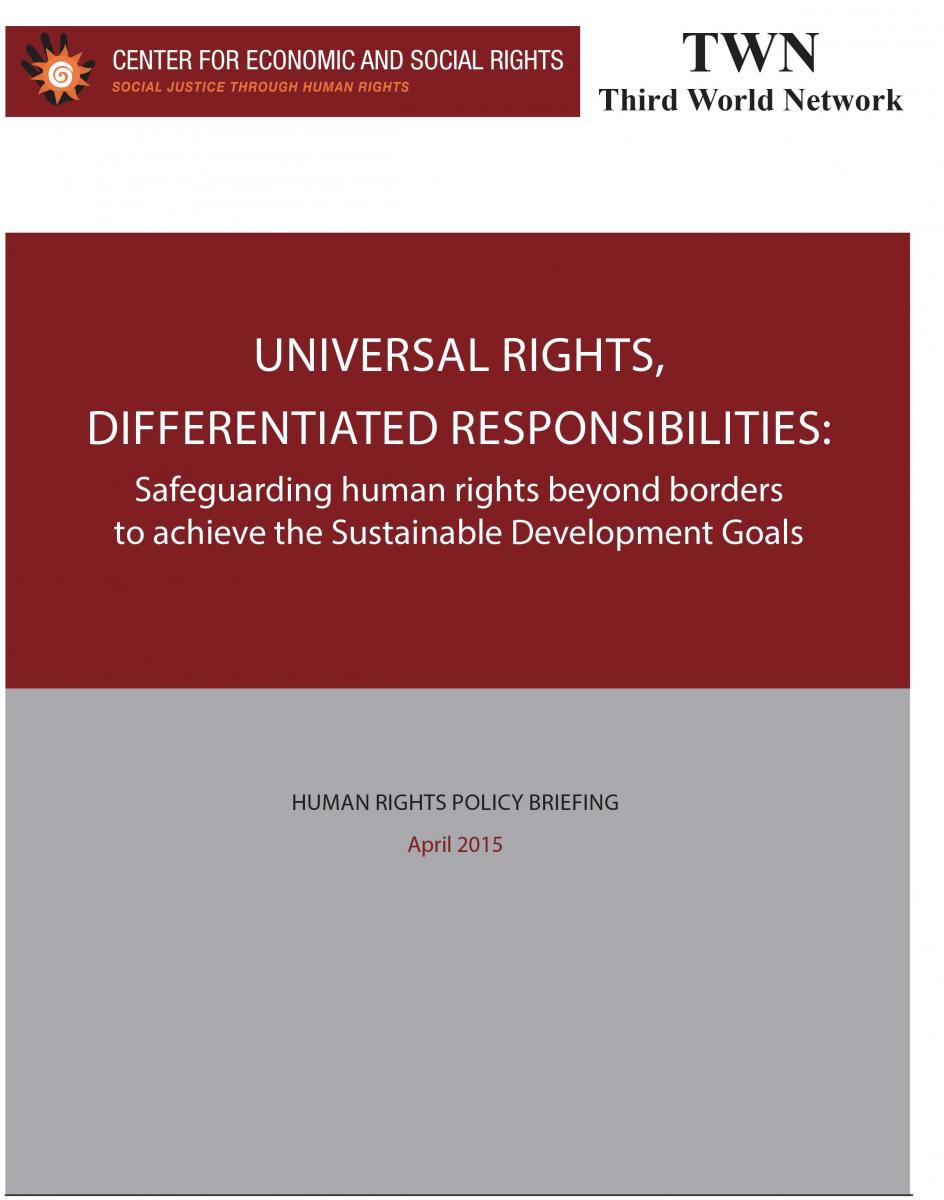 One of the main faultlines in the post-2015 and Financing for Development (FFD) processes is Common But Differentiated Responsibilities (CBDR), first enshrined in the Rio Principles of 1992. Developed and developing countries disagree over how far CBDR applies, with the G77 seeing it as broadly relevant across the agenda, while the majority of ‘Global North’ countries argue it is a narrow concept that only relates to the environment and climate change mitigation. From a human rights perspective, it is clear that high- and low-income countries do have differentiated responsibilities when it comes to financing sustainable development.

All States – no matter what their GDP – have a common responsibility to allocate the maximum of their available resources to realizing the economic, social and cultural rights of people in their territory, and to do so without discrimination. However, rich countries have additional and special responsibilities for financing sustainable development beyond their borders, as part of their human rights obligation of international assistance and cooperation (enshrined in several major human rights treaties and the UN Charter).  In particular, extra-territorial human rights obligations can serve as a useful yardstick to assess whether governments are upholding their common but differentiated obligations across all sustainable development dimensions. (See CESR and Third World Network’s new briefing Universal Rights, Differentiated Responsibilities) This is a legal duty and also a moral one: not just because they have the means to help, but also because they have often arrived at this wealth by exploiting the resources of the poorer countries –including in the present day through exploitative and unfair international tax and trade rules. Every year developing countries lose many times more to illicit financial flows (most of which benefits individuals and corporations in the Global North with access to tax havens and expensive accountants) than they gain via aid (official development assistance).

In order to make a new sustainable development agenda possible, rich countries will have to recognize their special and differentiated responsibility, by stepping up with concrete financial commitments. This starts with honouring longstanding pledges to dedicate at least 0.7% of GNI to ODA (which only a very few countries have so far done), in addition to dedicated climate finance. But there are many other measures they will have to take to gain the trust and partnership of the G77, as well as to meet the demands of civil society. These include commitments to fairer international tax rules, forgiveness of odious foreign debt, tackling illicit financial flows (for example by shutting down the tax havens they preside over), overhauling the trade and debt regimes, and reforming the undemocratic structures of global economic governance that profoundly disadvantage developing countries. Taken together, such measures could mobilize well over $1.5 trillion for sustainable development.

Accountability for the global partnership

It is not enough to merely make these pledges on paper. After all, the MDGs included provisions for ‘the global partnership for development’ (MDG8), but this languished neglected at the level of rhetoric - hamstrung in particular by lack of clear responsibility and accountability. We simply cannot afford another political commitment to ‘partnership’ between developed and developing countries that is more about window-dressing than real change.  In order to go beyond this, we must learn the lessons of the MDGs and put in place robust follow-up, monitoring and accountability for the ‘global partnership’, as an integral part of the post-2015 agenda and FFD commitments.

The first step towards such accountability will be measurable, time-bound commitments with clear lines of responsibility, which should be affirmed at both the July FFD conference in Addis Ababa and at the September Post-2015 Summit in September. But the second and likely even bigger challenge will be to create channels, mechanisms and forums to foster real accountability for those commitments.

Next month, States will discuss the ‘follow-up and review’ of the post-2015 agenda in New York. It is crucial that the monitoring mechanisms and accountability architecture decided have the mandate to cover the responsibility of donor countries under the global partnership (housed under Goal 17). In particular, the High-Level Political Forum should be given a meaningful role (and the necessary time and resources) to review the state of the global partnership at the international level, and to ask individual States to answer for their role in it. This would include not only the extent to which they are fulfilling their direct commitments to finance sustainable development overseas, but also the more indirect ways in which their policies and actions may be helping or hindering progress beyond their borders. One practical way in which States can take responsibility in this regard is to conduct ‘spillover assessments’ of the impact of their tax policies and agreements (for example with regard to corporate taxation) on the achievement of human rights and sustainable development goals in other countries. There is also a strong push now for an autonomous follow-up mechanism specifically for the Financing for Development process, which could be another important step towards cross-border accountability for sustainable development financing.

For both political and substantive reasons, the ‘global partnership’ between countries to finance and implement sustainable development is arguably the most important piece of the post-2015 puzzle. If we don’t want to waste this opportunity, we must concentrate not only on securing clear, concrete financing commitments, but also focus strenuous efforts on ensuring multiple channels for meaningful monitoring of these promises. The only ‘partnership’ worth having is one that is transparent, equitable, and accountable to those it purports to serve – otherwise it is not a partnership at all.