This 2009 report was undertaken becuase of Guatemala's woeful progress in addressing alarming levels of deprivation and disparity in the country. The lack of progress cannot simply be attributed to the challenges of post-conflict reconstruction, setbacks in the economy or unforeseen consequences of well-intentioned development policies. It is fundamentally a question of injustice. 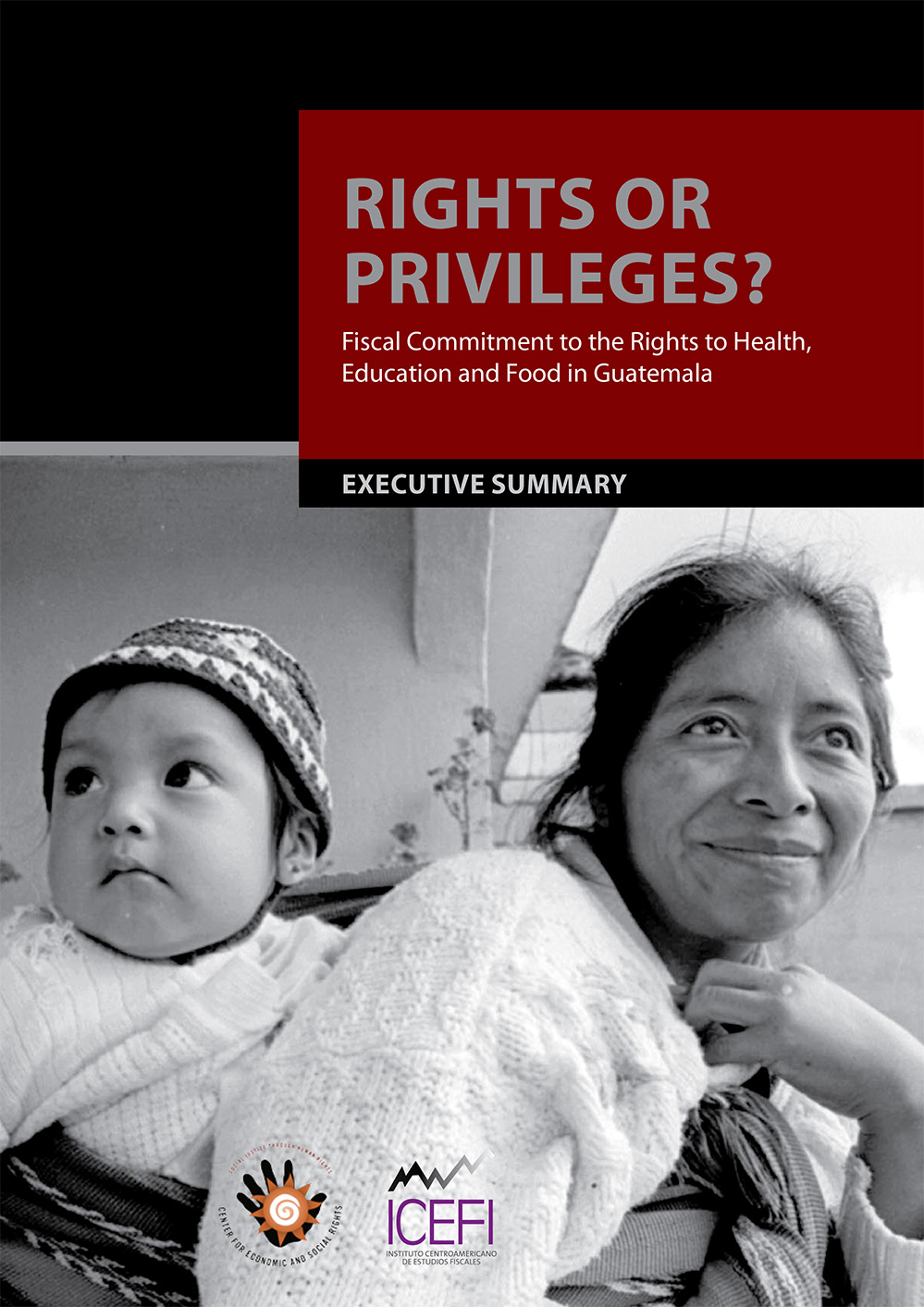 In evaluating the efforts of the Guatemalan state in meeting its human rights obligations, "Rights or Privileges?" takes as its starting point a series of human development indicators and other statistical data that paint a picture of the current state of health and education in Guatemala. Particular reference is made to three emblematic areas of concern: child chronic malnutrition, maternal mortality, and low primary school completion. These issues are analyzed in light of three main principles of economic and social rights among the population: universality of minimum core obligations and non-retrogression, the principle of equality and non-discrimination, and the duty of progressive realization of economic and social rights according to the maximum available resources.

Recognized internationally as key fronts in the struggle against poverty, these issues are also identified as critical priorities for government action under international human rights standards. It is also in these areas that the most alarming deficits and disparities in health and education can be found in Guatemala. They represent some of the gravest threats to the security, physical integrity and life opportunities of Guatemala's children and young people, who form the majority of the country's population.

A matter of rights

By tracing the link between Guatemala's dismal human development outcomes and the deficiencies in public policy over the last decade, the study makes the case that the widespread deprivation and flagrant disparities in access to food, health and education are, to a large extent, avoidable. They evidence a clear lack of political will to realize these rights of all sectors of the population.

Diagnoses of the state of health and education in the country are not lacking. In approaching these issues from a human rights perspective, CESR and ICEFI's joint report seeks to complement the work carried out by international development organizations, Guatemalan civil society organizations and relevant government ministries, by putting the emphasis on accountability.

The normative framework of human rights can provide a set of evaluative principles against which to hold governments to account for their efforts in the fields of health and education. These are not externally-imposed standards, but a set of norms developed by international community which the State of Guatemala has itself helped to craft and pledged adherence to, and which are reaffirmed in binding legal and political commitments made at the national level. If this framework of international and national human rights standards appears to have had little impact in determining public policy over the last decade, it is in part because human rights - and economic, social and cultural rights in particular - continue to be seen merely as hortatory and rhetorical statements of aspiration.

The approach adopted in this project seeks to operationalize the human rights framework to increase its usefulness as an instrument for monitoring and shaping public policy. It does so by using a range of quantitative and qualitative tools of socioeconomic analysis to assess compliance with human rights obligations. Questions addressed include: Is the state doing all it can to use maximum available resources to move as expeditiously as possible towards the full realization of the rights to health and education in Guatemala? Is it attending to its core obligations as a matter of priority? Has it identified and put in place measures to diminish inequalities and disparities reflecting systemic discrimination and disadvantage?

Such questions are all the more pertinent at this historical juncture. The government of President Alvaro Colom's Unidad Nacional de la Esperanza (UNE), which took office in January 2008, has announced that its overriding strategic objective is to reduce poverty and improve the quality of life of all Guatemalans. Health and education are identified as key priorities of the government's social development policy, and specific commitments have been made, among others, to tackle malnutrition and enhance access to education for those living in poverty.

While welcoming these rhetorical commitments, the report is part of advocacy efforts urging the new administration to be guided at all times by fundamental principles of human rights when framing public policies in areas related to health and education, including poverty-reduction strategies and fiscal policies. It presents a series of recommendations regarding measures that should be used by the government to comply with its human rights obligations in the sphere of health and education. These are anchored in the demands and proposals made by Guatemalan civil society organizations and enshrined in the Peace Accords, as well as in national and international human rights standards.

The launch of the report comes at a time when the 2010 national budget is being debated in the Guatemalan Congress; the issues that the report highlights continue to be main priorities for the government and concerns for the population. It is part of a broader advocacy strategy coordinated with other Guatemalan civil society organizations, including health and education specialists, as well as representatives of social movements, international organizations and selected governmental institutions in Guatemala. These advocacy efforts will draw attention to the consequences of pursuing the "minimalist" vision of the state which has characterized successive administrations, and will stress the need to adopt the "rights-fulfilling" vision which informed the Peace Accords. CESR and ICEFI believe the government of President Alv??ro Colom has a historic opportunity to realize this vision, but it will require a decisive change of course if Guatemala is to avoid a continued slide towards a stunted future.