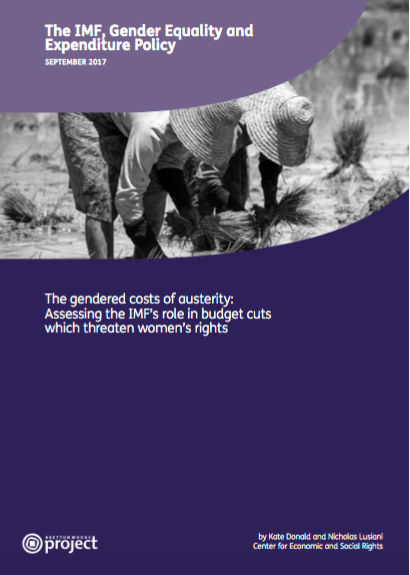 The IMF, Gender Equality and Expenditure Policy, a new briefing by CESR's Kate Donald and Nicholas Lusiani, provides a concise assessment of the changing stance of the International Monetary Fund (“IMF” or “the Fund”) on the key fiscal issue of contractions in public expenditure and their effect on women. The briefing explores the Fund’s positive and negative influence on public expenditure decisions, and explains how public spending cuts impact women’s human rights disproportionately, impeding progress towards gender equality.

The briefing includes a case study of Brazil, where the IMF recently played a significant role in gender-unequal public spending cutbacks. It concludes with a series of proposals aimed at safeguarding women’s rights in times of economic crises. Ultimately, implementing austerity to reduce public expenditure has real economic, political and human rights costs, largely shouldered by women, and palliative measures such as social safety nets and targeted gender programs can do little to alleviate those inequities. Unless governments plan to ignore their standing human rights obligations, the Fund and its Board should prioritize efforts to implement robust, progressive tax and fiscal alternatives in the macro-context, thus preventing the pain of fiscal adjustment altogether.

This briefing is part of The Bretton Woods Project's Compendium of Feminist Macroeconomic Critiques, released in October 2017 and part of a series on the gendered impacts of IMF policy, examining the Fund’s policy advice and conditionalities in the context of resource mobilization, labor market fluctuations and government expenditure.  It has been produced as part of the Gender Equality and Macroeconomics project, a joint project of the Bretton Woods Project and the Gender and Development Network.