Allison Corkery, Director of CESR's Rights Claiming and Accountability Program, on the next phase of our ongoing collaboration with Egyptian human rights defenders.

I recently joined a group of leading Egyptian NGOs for a two-day planning retreat in Tunis, which CESR co-organized with the Egyptian Center for Economic and Social Rights in the sidelines of the World Social Forum. Our goal: to flesh out an idea for a new online tool to monitor how government policies are impacting economic, social and cultural rights in Egypt. The motivation for developing such a tool is to ensure that the Egyptian Government is held accountable, domestically, for the commitments it has made before international human rights bodies repeatedly, but rarely implemented. 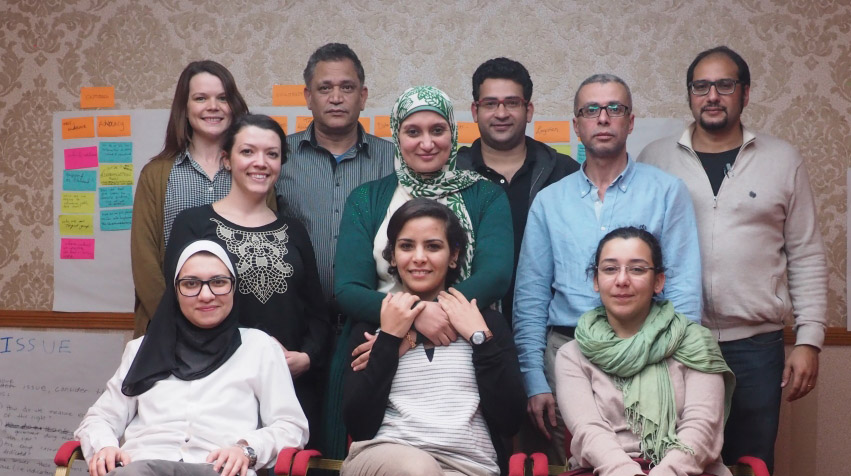 With a young, tech-savvy population, virtual advocacy has offered an important space for social justice in Egypt. This is particularly the case in a context where shrinking civil society space limits opportunities for in-person collaboration. Egyptian NGOs have been keen to explore how to use this space to build momentum about economic, social and cultural rights. With our interest in how technology can advance human rights monitoring, CESR was eager to support the initiative.

Between the 10 of us, we had a broad range of expertise in the room—in research, advocacy, economics, public health, architecture, statistics, and graphic design. Nevertheless, for many of us—myself included—this was a new kind of project.  It was exciting, though somewhat daunting, to be conceptualizing something so innovative from the ground up.

We invited Aspiration, specialists in technology solutions for nonprofits, to facilitate the retreat. Over the course of the two days we came up with a shared vision for the tool—agreeing we wanted something that would open up space for civil society to collaborate more closely, as well as to engage in constructive dialogue with decision-makers.  By translating the recommendations of international human rights bodies into indicators that (a) reflect people’s everyday concerns; and (b) enable evidenced-based advocacy around them, the tool would not only allow for public monitoring of the  government’s performance, it could also prompt greater responsiveness from it.

We also mapped out and prioritized potential users of the tool and brainstormed the ways they might interact with it. Having a better sense of ‘by who’, ‘how’ and ‘why’ the tool would be used allowed more informed deliberation about how we were conceptualizing it. The key question: should it be more like a database? In other words, is a comprehensive, but neutral, source of data on economic, social and cultural rights what is most urgently needed? Or is it more important that the data tell a ‘bigger picture’ story about what’s happening in the country and what progress the government is making to advance economic, social and cultural rights?

Our conclusion was that we would need to tell a story with data, for example by developing a score card, index or dashboard. Specifically, we need to draw together data from fragmented datasets and then present it in a way that is accessible to activists, citizens, and policymakers. This would help uncover hidden patterns of poverty and social exclusion in the country and show trends over time. Doing so has the potential to be a powerful counterbalance that can challenge the dominant narrative that Egypt is bouncing back from the economic woes it has faced in recent years.

In some respects we ended the two days with more questions than answers. Nevertheless, the opportunity to think deeply about the strategic value of an online tool was significant, helping us to narrow down the questions that will have to be answered as we advance in the coming months.

The retreat came days after the United Nations Human Rights Council adopted its report on Egypt’s Universal Periodic Review. CESR delivered an oral statement to the Human Rights Council. In it, we stressed how the “cycle of popular dissatisfaction, social unrest, political repression and rising extremism” vividly illustrated the indivisibility and interdependence of rights in a transitional context.

Nevertheless, economic, social and cultural rights concerns in Egypt were relatively overshadowed by the country’s increasing political repression and crackdown on dissent. Egypt received only 29 recommendations specifically focused on economic, social and cultural rights – out of a total of 300 –during the November 2014 review, despite strong advocacy from Egyptian groups and CESR to draw the Council’s attention to the severe and widespread deprivations of these rights.

At last month’s Council session, the Egyptian Ambassador announced that all of these had been accepted by the government. This is a welcome commitment, of course, but it remains unclear whether it will influence practice on the ground. The government has established a permanent inter-ministerial committee, mandated to study the recommendations and propose policies and measures necessary to implement them. The Committee has reportedly "conducted an extensive consultation” with civil society; although none of our partners had ever heard of it.

In a country where more than 20 million people are living in poverty, addressing the long standing patterns of socio-economic exclusion—which appear to be becoming even further entrenched—is more urgent than ever. In the absence of official channels for citizen engagement, there is a pressing need for alternative avenues to foster public debate, mobilize for action and strengthen social accountability. Our aspiration is that, by leveraging our collective strengths in the creation of this new tool, we can make a small, but significant contribution to this end.