This case study in PDF format can be downloaded here.
This brief case study examines the use of OPERA, CESR’s monitoring framework, to prepare a submission to the Committee on the Elimination of All Forms of Discrimination against Women on Angola in 2013. It is part of a series of case studies produced by CESR to share insights and learning from the use of OPERA in a variety of contexts and settings.
After a decade of oil-fueled economic growth, health services in Angola continued to be undermined by inequitable resource distribution, with maternal and infant mortality rates among the poorest in the world. Working in collaboration with Chr. Michelsen Institute (CMI) of Norway, and Open Society Institute for Southern Africa (OSISA) in Angola, CESR used OPERA to frame a submission to the Committee on the Elimination of all forms of Discrimination Against Women (CEDAW) on this issue, when it reviewed Angola’s sixth Periodic Report in early 2013.
In line with the guidelines from the Committee, the short submission focused on highlighting priority concerns in its sub-headings and suggesting specific recommendations in its final section. The submission was prepared on the basis of desk-based research and then shared with groups in the country for their feedback and comments. Using OPERA allowed us to show how the economic boom that Angola experienced after three decades of civil war came to an end (the country’s economy increased nearly tenfold between 2003 and 2011) failed to benefit the majority of the population, especially women. 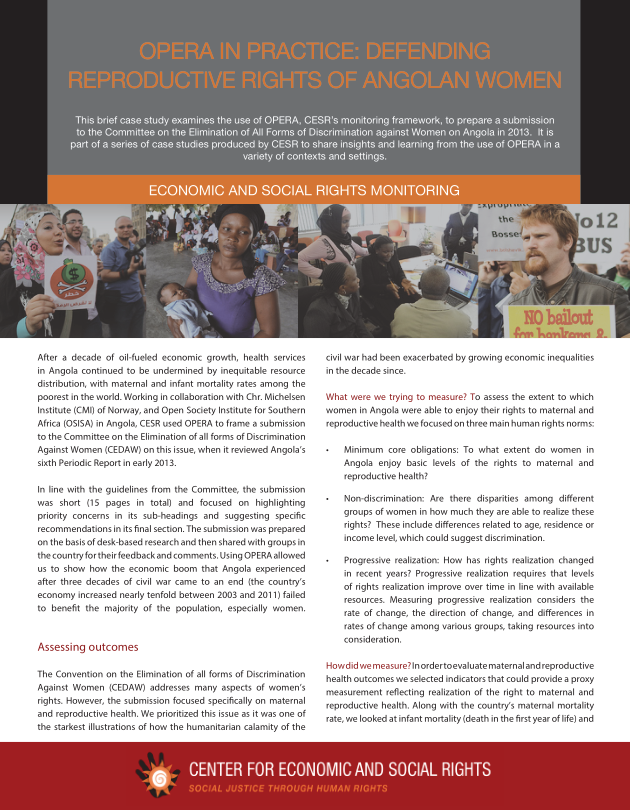