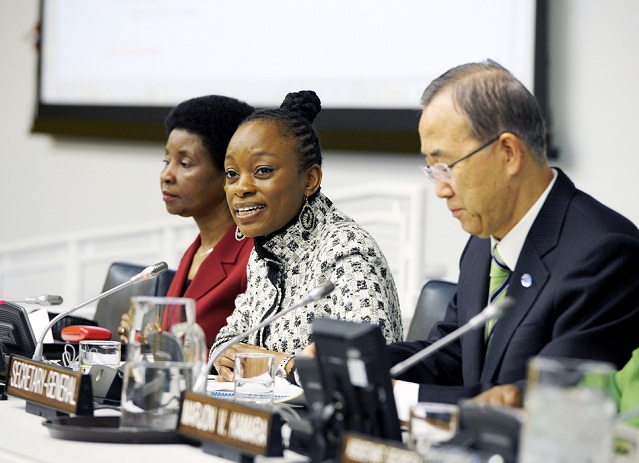 Rural women represent one quarter of the global population and produce the majority of the food consumed around the world. Yet despite their numbers and their significant contribution to the wellbeing of their societies, rural women remain disproportionately exposed to economic and social rights deprivations.

Although 60 per cent of employed women in Sub-Saharan Africa work in agriculture, they account for just 15 per cent of landholders. Similarly unbalanced figures for South Asia, and indeed other parts of the world, underline the urgency of confronting such inequalities, for the sake of both women themselves and society at large. It is well documented that when more income is channeled to women, indicators on child nutrition, health and education all improve. As things stand, however, women and girls account for 60 per cent of the world’s chronically hungry people. The promise of meaningful equality and an adequate standard of living remains far off for many millions of rural women. Two-thirds of the world’s 800 million illiterate people are women, while men’s wages remain higher than women’s in almost all countries. Women are the largest contributors to the care economy, much of which is not paid at all. The disadvantages experienced by women are exacerbated by urban-rural imbalances, with women living in rural areas suffering higher levels of domestic violence and less access to health care services. In Guatemala, for example, poverty levels in rural areas are more than double those found in urban areas, with women and girls suffering the most pronounced deprivations. In Egypt, meanwhile, urban women are 50 per cent more likely to be literate than their counterparts in rural parts of the country. Similar patterns of inequality, with rural women facing compounded deprivations, can be seen in numerous countries all over the planet.

It is fitting, then, that rural women should figure centrally in this year’s UN Commission on the Status of Women (CSW). This focus was particularly timely considering the extent to which the inter-related food, fuel, financial and economic crises have deepened the precarity and vulnerability of this sector.

The Commission highlighted much of the common ground between women’s development and the broader economic and social rights agenda. In its draft conclusions, it emphasized that the empowerment of rural women could play a crucial role in eradicating hunger and poverty, while also furthering the cause of sustainable development and accelerating progress towards the Millennium Development Goals. It also underlined the importance of ensuring that rural women have a meaningful voice in decision-making bodies, so as to be able to hold public and private actors to account, and the need for concrete measures to fulfill their rights to access to the highest attainable standards of health and education. Non-discrimination and equality is one of the core principles underpinning provisions set out in the International Covenant on Economic, Social and Cultural Rights, while the Convention on the Elimination of all forms of Discrimination Against Women contains important provisions for the protection of economic and social rights of women. In this sense, women’s empowerment, economic and social rights protections and human development have all been shown to be complementary and mutually reinforcing.

Indeed, improving the living conditions of rural women and defending economic and social rights are two interdependent agendas. As the conclusions of this year’s CSW make clear, creating a better, more dignified future for the many millions of women who make up this sector is in the best interests of the planet as a whole.