The ruling nullifies several provisions of the Basque legislation that guaranteed access to health care for those groups excluded by the RDL 16, in particular undocumented immigrants—access which had been funded by the Community’s own budget. Thus the ruling endangers the health of thousands of people living in Euskadi (Basque Country) and has consequences for other autonomous communities (AACC) that adopted similar norms aimed at protecting the universality of the health system and which have also been challenged in court by the central government.

The ruling establishes that autonomous communities cannot expand the scope of people receiving healthcare beyond the limits determined by the Royal Decree 16 (RDL 16), even if they assume the cost of these improvements and do not put at risk the minimum services (emergency care, pregnancy and childbirth care and coverage for children) established by the Spanish government.  By doing so, the Constitutional Court (CC) cuts the vital line that has allowed undocumented migrants to obtain health services since 2012. The signatory organizations state that by preventing the AACC from going beyond the minimum established by RDL 16, Spain is violating its obligation to adopt measures up to the maximum of its available resources, thus progressively realizing the right to health as provided in the International Covenant on Economic, Social and Cultural Rights (PIDESC) ratified by Spain.

Consequently, the ruling ignores Spain’s human rights obligations and imposes a straitjacket that will prevent the AACC from adopting regulations aimed at extending the scope of social rights protections in the legitimate exercise of their regulatory power.

Likewise, the organizations regret that the CC has abandoned the doctrine it had assumed in its preliminary order (239/2012) on this litigation, in which it affirmed that the right to health and the appropriateness of avoiding risks to the health of the population as a whole could not be undermined by the likelihood of unspecified cost saving.  On the basis of this argument, the CC allowed Euskadi to continue providing universal health care for migrants until this ruling was adopted.

The organizations emphasize that the Court’s vote on this ruling was far from unanimous, as shown by the five dissenting votes of a total of 12 judges, who distanced themselves from some controversial statements. The dissident judges affirm that the Court departs from its own jurisprudence, articulating a new interpretation of what constitutes a minimum standard applicable to the state level turning it into a maximum ceiling for the autonomous communities, thus unduly restricting their autonomic capacity to expand the scope of access to health protection in its own territory.

In addition, four of the five dissenting judges show their concern about the prospect that “the informal pathway” becomes the only resource left for the AACC to combat social exclusion derived from the current restrictive health policy.  Thus this ruling further reduces legal protection and security of the right to health of undocumented migrants, a group in a situation of maximum social and economic vulnerability.

The signatory organizations point out that several human rights mechanisms have established that the RDL 16/ 2012, which fractured the Spanish universal health system and excluded undocumented migrants, is contrary to the obligations of Spain under the treaties that regulate these rights, qualifying it as an unjustified, discriminatory and regressive measure. The UN Human Rights Committee; the Committee on the Elimination of Discrimination against Women; the Committee on Economic, Social and Cultural Rights; the European Committee of Social Rights; and six Special Rapporteurs and Independent Experts of the United Nations and the Council of Europe recommended its immediate reform to the Spanish government. Five years later, the central government continues to turn a deaf ear to these recommendations. Moreover, the Constitutional Court’s ruling now prevents the Basque Country and other AACC from correcting the discriminatory nature of the state regulation.

If the Constitutional Court maintains the reasoning of Judgement 134/2017 in subsequent similar cases filed by other autonomous communities, the consequences could be catastrophic for the life and health of the populations excluded from the health system, and for undocumented migrants in particular.

As argued by one of the judges in his dissenting vote, the AACC, through regulations or administrative practices, have gradually configured a system of assistance that extended the scope of health coverage to sectors excluded by the Royal Decree 16 from 2012. Over the past five years, 14 communities have extended the care coverage to people excluded by the Royal Decree 16, while others issued internal orders to offer services to all people seeking public health services, regardless of their administrative status. These measures, although insufficient to put an end to the injustice of health exclusion in Spain, have made it possible to alleviate some of the most dramatic effects of it, allowing many people to receive essential health care services.

Despite this so-called “health cordon,” health care for people excluded by the Royal Decree Law was far from adequate. Between January 2014 and August 2017 REDER has documented more than 3,784 cases of people who were unable to access health care services despite having the right to receive such services (either within the minimum framework of RDL 16/2012 or covered by the AACC regulations). The vast majority of these were undocumented migrants, including 158 pregnant women, 270 children and 364 cases of denial of services or erroneous billing of emergency services. Several of these cases were resolved by the autonomous communities’ system acting on their own initiative or as a result of civil society organization’s efforts.

The urgency of restoring the universal health system in Spain

The CC 134/17 ruling reaffirms the regressive trend in this Court’s jurisprudence on the right to health in Spain, deepens the health exclusion against the most vulnerable groups of society and puts the lives of these persons at risk.

Faced with this scenario, the signatory organizations are committed to redouble their efforts to bring to the attention of relevant international bodies evidence of the impacts of RDL 16/2012 and this ruling in particular, seeking to ameliorate its consequences on the most vulnerable.  The organizations also point out that on September 12, 2017 the majority of political parties in the Parliament signed a pact in which they pledged to propose the necessary legislative measures to guarantee access of all persons living in Spain to the public health system, without restrictions. After the Constitutional Court’s ruling 134/2017, the implementation of these measures is more urgent than ever. 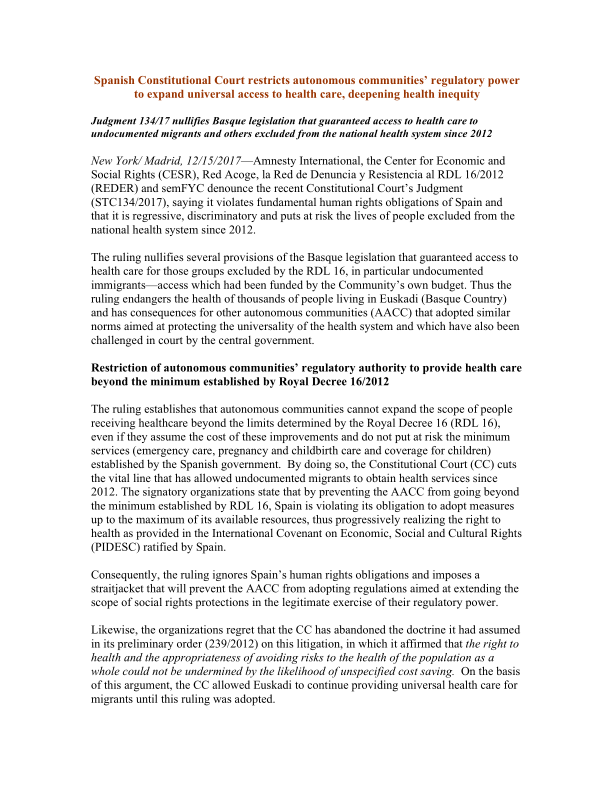 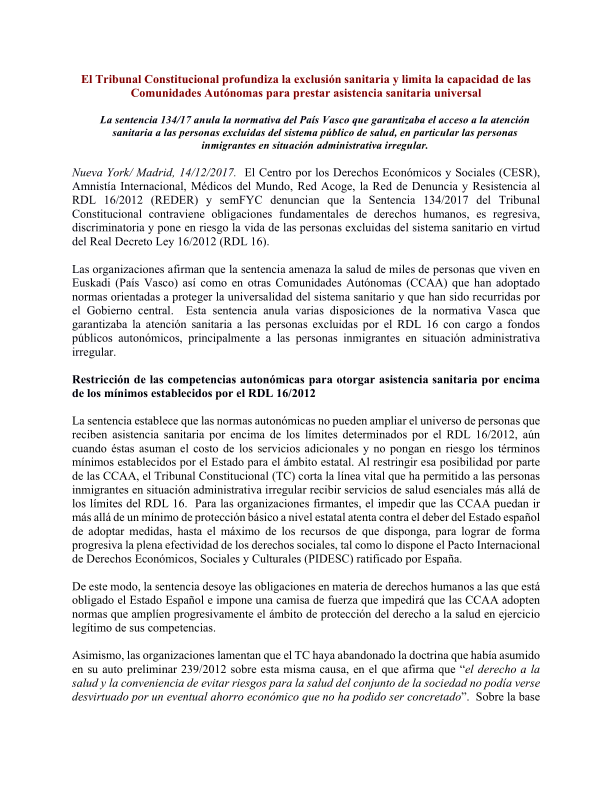