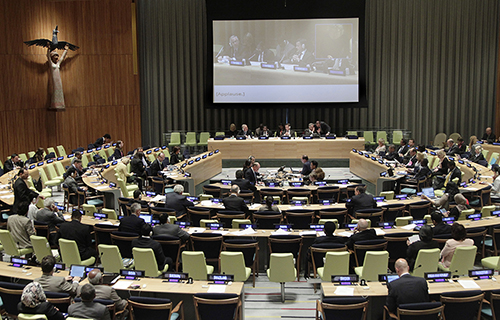 Governments meeting at the UN General Assembly (GA) this week have heeded civil society demands for human rights to be at the core of the global commitments succeeding the Millennium Development Goals (MDGs) in 2015.  The outcome document of the GA Special Event on the MDGs, held on 25 September, calls for a universal framework of goals applicable to all countries which promotes “human rights for all”. Once a lightning rod at UN development forums, human rights appear to have garnered consensus as a central foundation of development - at least on paper.

The GA marks a turning point in the debate. It is no longer a question of whether, but how, human rights should be integrated in the new framework. CESR has been intensely engaged in efforts around the GA to ensure that human rights principles and standards inform the purpose and content of the post-2015 agenda, as well as its implementation mechanisms.

At an opening meeting chaired by the President of the General Assembly on 22 September, ‘Advancing Regional Recommendations on the Post-2015 Agenda’, CESR was one of several civil society organizations called upon to convey the recommendations emerging from the worldwide post-2015 consultation process. "As debates move to how the new goals are framed, how targets are set, and how common but differentiated responsibilities are determined, it is important that human rights are affirmed and applied as the normative framework for accountability to which all actors –within, above and beyond the state – are held to answer," said CESR’s Executive Director Ignacio Saiz in his intervention at the meeting.

On 24 September CESR hosted a civil society forum, ‘Visions and Voices for Human Rights: Integrating human rights into the post-2015 development agenda’, together with IBON International and Amnesty International, bringing together more than a hundred organizations from across the globe to discuss proposals for a new sustainable development paradigm that serves to realize the full range of human rights. Recommendations included mechanisms to strengthen the accountability of powerful corporations and international financial institutions for the human rights impacts of their policies and practices; and the need to include more far-reaching commitments to address systemic gender, income and other inequalities that were overlooked in the current MDGs.

The growing consensus over the critical importance of human rights to future development efforts is reflected in the UN Secretary General’s report to the General Assembly, which affirms that ending poverty is “a matter of basic justice and human rights”. This same message, calling for human rights to be placed at the heart of the post-2015 agenda, also emerged from numerous global consultations organized over the past year. Throughout the General Assembly Special Event, heads of state and other government officials likewise echoed the message that development without human rights cannot be considered sustainable, effective nor legitimate.

The outcomes of this GA confirm, at least on paper, that human rights can no longer be marginalized in development debates. Yet the countervailing winds are strong, and the road of political negotiations ahead steep. Having helped secure a central place for human rights in the post-2015 process so far, CESR and its partners worldwide will continue working over the coming year to ensure that member states translate these rhetorical commitments into practice.