Human rights principles and standards should inform any recovery strategy deployed in the face of a recession. It is during times of austerity, when human rights and freedoms are threatened, that there is most need for them to be protected. In many developed countries hasty reform packages have allowed governments to legitimize a rolling back of the welfare state, thus undermining the basic human rights of citizens, however. The economic crisis in Spain is likely to become a human rights crisis if the state fails to effectively protect the most vulnerable.

Since the crisis hit in 2008, Spain’s unemployment level has increased dramatically. Spain also has one of the highest rates of child poverty in the EU and the economic crisis has exacerbated this problem. The impacts of the crisis have been most severely felt by disenfranchised young people and marginalized groups such as immigrants, women and the Roma community, in a climate of rising discrimination and xenophobia.

From Puerta del Sol in the center of Madrid to town squares all around the country, a larger, grassroots civil society movement developed, demanding the protection of fundamental economic and social rights. CESR is working to ensure accountability for human rights violations caused by the crisis - and the government’s response to it - by making use of existing international human rights mechanisms and working with national-level civil society groups. In May 2012 Spain was assessed by the UN Committee on Economic, Social and Cultural Rights (CESCR) for the first time in eight years. CESR coordinated a shadow report, as part of a coalition of 19 organizations, which was submitted to CESCR ahead of the session. (An English-language summary of the document can be found here). A factsheet providing a statistical snapshot of the worrying trends in economic and social rights in the country was also distributed to members of the Committee. Prior to this, the Center also produced a joint submission with the Observatori DESC, for the Pre-Sessional Working Group in May 2011.

As Spain faced a major UN review of its human rights record in 2015, a factsheet by CESR illustrated how four years of austerity had driven rising poverty, deepening inequality and a serious deterioration in a variety of economic and social rights in the country.
Published on the occasion of Spain's appearance before the Human Rights Council's Universal Periodic Review (UPR) mechanism in January 2015, CESR's rigorous analysis of statistical data from the prior four years demonstrated that, despite repeated calls from the United Nations and European human rights bodies, Spain continued with the implementation of harsh budget cuts and other austerity-driven reforms that deprived people already vulnerable to the effects of the economic crisis of their basic human rights.
In December, 2017 CESR released a statement with Amnesty International, Red Acoge, la Red de Denuncia y Resistencia al RDL 16/2012 (REDER) and semFYC denouncing the recent Constitutional Court’s Judgment (STC134/2017), saying it violated fundamental human rights obligations of Spain and that it was regressive, discriminatory and put at risk the lives of people excluded from the national health system since 2012.
The ruling nullified several provisions of the Basque legislation that guaranteed access to health care for those groups excluded by the RDL 16, in particular undocumented immigrants—access which had been funded by the Community’s own budget. Thus the ruling endangered the health of thousands of people living in Euskadi (Basque Country), with consequences for other autonomous communities (AACC) that adopted similar norms aimed at protecting the universality of the health system and which had also been challenged in court by the central government.
In March, 2018, CESR released a factsheet analyzing the impact of austerity measures on the right to an adequate standard of living, the right to health, sexual and reproductive health and rights (SRHR) and the right to work, between 2012 and 2017, concluding that the measures do not comply with human rights standards and have had a devastating and disproportionate impact on the most vulnerable populations.
In July, 2018, Spain's new, left-wing government approved new legislation restoring universal free health care to all residents, thus reversing the exculsionary RDL 16/2012. A sustained and coordinated fight by Spanish civil society, supported by CESR and other international actors, obtained a firm promise from the new government to repeal the decree that deprived nearly one million people of the right to health.

A sustained and coordinated fight by Spanish civil society and CESR obtained a promise from the new government to repeal a decree that deprived nearly one million the right to health. 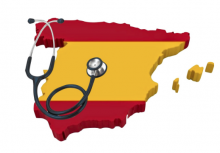 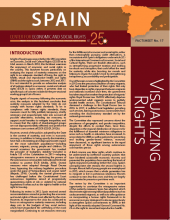 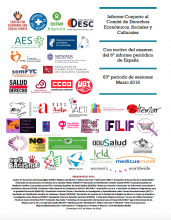 Press release: As Spain appears before the Human Rights Council, CESR and its partners affirm access to health care is still not guaranteed to migrants in the country.

Austerity and retrogression: Have governments got the right?

As a fiscal compact among European leaders furthers prejudice against ESCR, CESR joins an open letter to Spain's Prime Minister.

CESR and allies welcome Spain's ratification of the Optional Protocol to the ICESCR.

Taking Spain's austerity measures to task at the UN

UN submission: As Spain appeared before the UN Committee on Economic, Social and Cultural Rights for the first time in eight years, CESR has presented two new documents in Geneva.

The UN Committee on Economic, Social and Cultural Rights has echoed civil society demands in questioning the cuts made to social spending in response to the crisis.

After five years of economic crisis and a series of austerity budgets that have served only to compound its problems, people in Spain are being pushed to the limits of resilience.

Factsheet illustrates how austerity is driving violations of economic and social rights in Spain (2015).

2012 factsheet on economic, social and cultural rights in Spain since the economic crisis took hold in 2007.

CESR has coordinated a parallel report to the UN with 18 other civil society organizations.