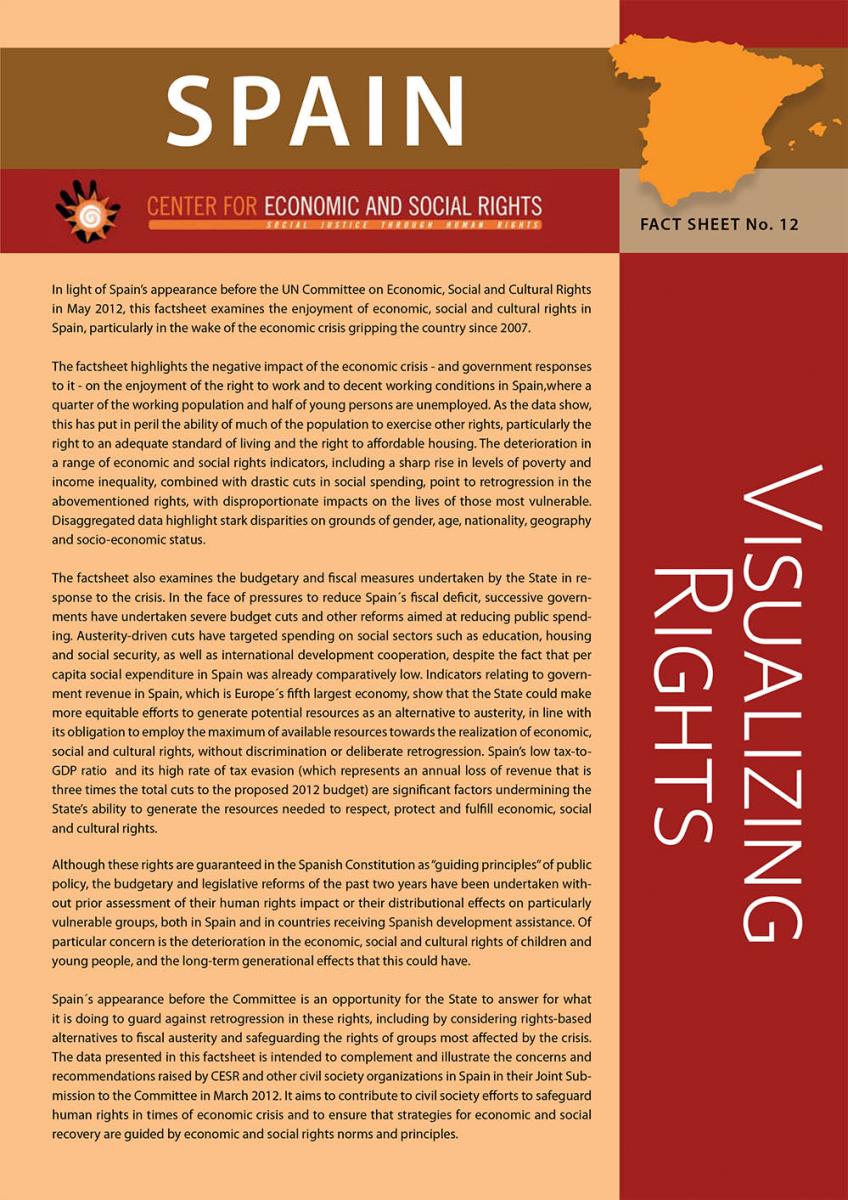 This factsheet examines the enjoyment of economic, social and cultural rights in Spain since the economic crisis took hold of the country in 2007. It highlights the negative impact of the economic crisis - and government responses to it - on the enjoyment of the right to work and to decent working conditions in Spain, where a quarter of the working population and half of young persons are unemployed. As the data shows, this has put in peril the ability of much of the population to exercise other rights, particularly the right to an adequate standard of living and the right to affordable housing.

Deterioration in a range of economic and social rights indicators, including a sharp rise in levels of poverty and income inequality, combined with drastic cuts in social spending, point to retrogression in the abovementioned rights, with disproportionate impacts on the lives of those most vulnerable. Disaggregated data highlight stark disparities on grounds of gender, age, nationality, geography and socio-economic status.

Budgetary and fiscal measures undertaken by the State in response to the crisis are also analysed. In the face of pressures to reduce Spain's fiscal deficit, successive governments have undertaken severe budget cuts and other reforms aimed at reducing public spending. Austerity-driven cuts have targeted spending on social sectors such as education, housing and social security, as well as international development cooperation, despite the fact that per capita social expenditure in Spain was already comparatively low. Indicators relating to government revenue in Spain, which is Europe's fifth largest economy, show that the State could make more equitable efforts to generate potential resources as an alternative to austerity, in line with its obligation to employ the maximum of available resources towards the realization of economic, social and cultural rights, without discrimination or deliberate retrogression. Spain's low tax-to-GDP ratio and its high rate of tax evasion are significant factors undermining the State's ability to generate the resources needed to respect, protect and fulfill economic, social and cultural rights.

Although these rights are guaranteed in the Spanish Constitution as 'guiding principles' of public policy, the budgetary and legislative reforms of the past two years have been undertaken without prior assessment of their human rights impact or their distributional effects on particularly vulnerable groups, both in Spain and in countries receiving Spanish development assistance. Of particular concern is the deterioration in the economic, social and cultural rights of children and young people, and the long-term generational effects that this could have.

The data presented in this factsheet is intended to complement and illustrate the concerns and recommendations raised by CESR and other civil society organizations in Spain in their Joint Submission to the Committee in March 2012.