Human rights defenders working to forge a better future for the people of Egypt traveled to Geneva last week, as the North African country came under the scrutiny of a United Nations human rights treaty body for the first time since the Arab Spring. In the run-up to the 51st session of the Committee on Economic, Social and Cultural Rights, CESR joined forces with a broad coalition of Egyptian civil society organizations to make sure this important and timely event has a real impact in the lives of ordinary people. 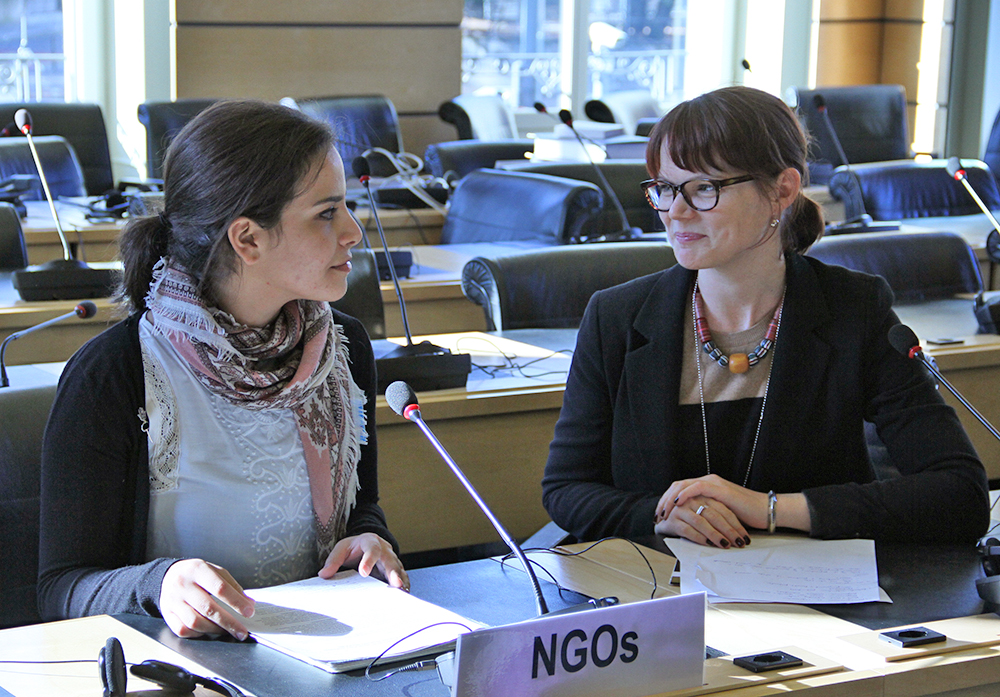 On the morning of Monday 11, Allison Corkery (Center for Economic and Social Rights) teamed up with Heba Khalil (Egyptian Center for Economic and Social Rights) to deliver a statement to the Committee outlining the current situation of economic and social rights in Egypt. This well-received presentation was followed by a private briefing on Wednesday 13, when members of the Committee attended a meeting with civil society advocates to discuss the situation in Egypt in more detail. Representatives from CESR, ECESR, the al-Shehab Center for Comprehensive Development, the Egyptian Center for Civil and Legislative Reform, and the Housing and Land Rights Network all gave presentations, before Abdel Nasser Al-Sherif described his family's experience of being forcibly evicted from their home. Members of the Committee then questioned the speakers on a variety of issues where they needed more information in order to more effectively assess the government's compliance with its obligations.

The value of the information provided by civil society groups to Committe members was much in evidence on Thursday, when the Committee interrogated representatives of the Egyptian government over the country's performance in meeting its obligations under the International Covenant on Economic, Social and Cultural Rights. Many of the issues raised by the Committee echoed those addressed in its interactions with civil society. A more detailed elucidation of these concerns was also provided in a joint NGO report, prepared by CESR and ECESR and endorsed by 56 other Egyptian civil society organizations, which was submitted to the Committee in advance of the session.

Over the course of a full day of questioning, the Egyptian government was challenged over a variety of rights, including housing, education, employment, health care and water and sanitation. The government was also roundly criticised over its failure to provide up-to-date data in many areas. Indeed state representatives were forced on several occasions to admit they couldn't adequately answer the questions put to them, repeatedly pledging to supply information afterwards. The transversal issue of non-discrimination meanwhile led to a tense exchange, with state delegates insisting that Christians should not be defined as a minority, and even that the burning of churches could not be attributed to religious discrimination.

Meanwhile, civil society efforts also continued on the day of the Committee's evaluation. Making good use of the two-hour break between the morning and afternoon sessions, CESR and its partners briefed journalists at a special press conference organized by Habitat International and the Association of Correspondents Accredited to the United Nations.

Last week's events in Geneva came as human rights and social justice advocates in Egypt continued to navigate a delicate and uncertain transitional process. Nearly three years after the Arab Spring revolution, the promise of a better and fairer Egypt has failed to materialise, and the demands of international lenders have been prioritized over those of protesters around the country.

In the coming days the Committee will issue a set of recommendations which Egypt will be required to implement in order to meet its international human rights obligations. CESR and its partners will be working hard to monitor implementation of these recommendations. To this end, a special strategy meeting was organized the day after the Committee session, at which the civil society organizations present in Geneva discussed how best to move forward and ensure the recommendations translate into meaningful improvements on the ground. The first part of this important process has come to an end, but a new phase in the struggle to realize the economic, social and cultural rights of all Egyptian people has just begun.