Fiscal Policies and the Safeguarding of Economic, Social and Cultural Rights in Latin America: Argentina, Brazil, Colombia and Peru

Informe completo en formato pdf en español disponible aquí
Fiscal Policies and the Safeguarding of Economic, Social and Cultural Rights in Latin America
Thematic report and hearing at the Inter-American Commission on Human Rights
New York/Santo Domingo, May 10—Fiscal policy plays a central role in reducing inequality and realizing human rights for all, without discrimination. As the 168th Session of the Inter-American Commission on Human Rights (IACHR) occurs this week in the Dominican Republic, CESR and its partners in the region are holding a thematic hearing to highlight a fundamental concern: that the majority of Latin American countries have not yet taken advantage of the enormous transformative potential of fiscal policy in the fight against poverty, inequality and the structural underpinnings of human rights violations.
Since CESR and partners organized the first thematic hearing on fiscal policy and human rights in 2015, poverty in Latin America has begun to increase again, and progress on reducing inequality has stalled. 187 million people, more than 30% of the population in Latin America, are poor. Economic inequality regionally remains the highest in the world. Fiscal policies are not addressing these gaps, despite growing recognition by the IACHR—alongside the international human rights system and domestic judicial institutions—that human rights norms are fully applicable to economic policies, including fiscal policies.
For this reason, a coalition of twelve leading human rights and development organizations working at the local, national, regional and global levels (listed below) has convened the second-ever thematic hearing on the impact of fiscal policy in Latin America at the IACHR this week. This time the focus is on four particular situations of human rights abuses stemming from tax and fiscal policies in Argentina, Brazil, Colombia and Peru. An accompanying joint report—Fiscal Policies and the Safeguarding of Economic, Social and Cultural Rights in Latin America: Argentina, Brazil, Colombia and Peru—demonstrates the transformative role fiscal policy can and must play in achieving the Sustainable Development Goals (SDGs) and overcoming the historic human rights deficits facing Latin America today. An executive summary of the report is available here in English and in Spanish.
As shown in the report, fiscal policy in Latin America has had little effect in reducing economic inequality, even exacerbating the situation of the worst off in some countries, who end up being net contributors rather than net beneficiaries of the fiscal system. In general, countries in the region are characterized by fiscal policies that are not very transparent nor participatory, and are predominantly regressive, posing a low tax burden and an unequal tax structure weighted towards indirect taxes.
The thematic report offers concrete evidence from Argentina, Brazil, Colombia and Peru to show how central fiscal policies are to the enjoyment of human rights, especially by those most socially and economically excluded. It highlights the impacts of unprecedented austerity measures in Brazil, the urgent need for tax reforms to implement the Peace Agreement in Colombia, and the role of regressive fiscal policies in perpetuating inequalities in access to education, health, housing and social security in Peru and Argentina.
The report also illustrates that States are not doing enough to mobilize the maximum of their available resources, nor are they managing these resources efficiently toward the “progressive realization” of these rights, in accordance with human rights norms. The combination of more progressive income and wealth tax reforms, the repeal of useless tax incentives, the implementation of effective strategies to combat tax evasion and avoidance, alongside a better design and allocation of public expenditure, are all feasible alternatives to avoid a new era of austerity in the region. Altogether, the study presents a compelling case for aligning fiscal policy with human rights principles in order to ensure the sufficient, equitable, sustainable and accountable provision of public resources to realize human rights.
The Inter-American Human Rights System, in particular the IACHR, can play a key role in preventing fiscal policy-related human rights abuses, and in ensuring that human rights standards and principles apply fully to the monitoring and oversight of the fiscal policy cycle. In this week’s thematic audience, the petitioning organizations will present several recommendations to strengthen the IACHR’s scope of protection against human rights violations resulting from regressive and unjust fiscal policies. These include producing a thematic report on the issue and encouraging national human rights institutions to strengthen their oversight role on fiscal policy.
This initiative is being organized by the Center for Economic and Social Rights (CESR), Instituto de Estudos Socioeconômicos (INESC), Conectas Derechos Humanos, La Plataforma de Derechos Humanos (DHESCA Brasil), Justiça Global, Ministerio Público de la Defensa de la Ciudad Autónoma de Buenos Aires, Asociación Civil por la Igualdad y la Justicia (ACIJ), Centro de Estudios Legales y Sociales (CELS), Centro de Estudios de Derecho, Justicia y Sociedad (Dejusticia), Foro Salud, Asociación Pro Derechos Humanos (APRODEH), OXFAM.
The thematic session takes place on Friday, May 11, 2018 at 10:15 a.m. EST in the Hotel Crowne Plaza in Santo Domingo, Dominican Republic.
Video can be viewed live here.
Flyer for the event available here.
Follow the conversation on Twitter: #derechosyfiscalidad  #tax4humanrights
For more information, contact CESR Communications Manager Terry Roethlein at troethlein@cesr.org. 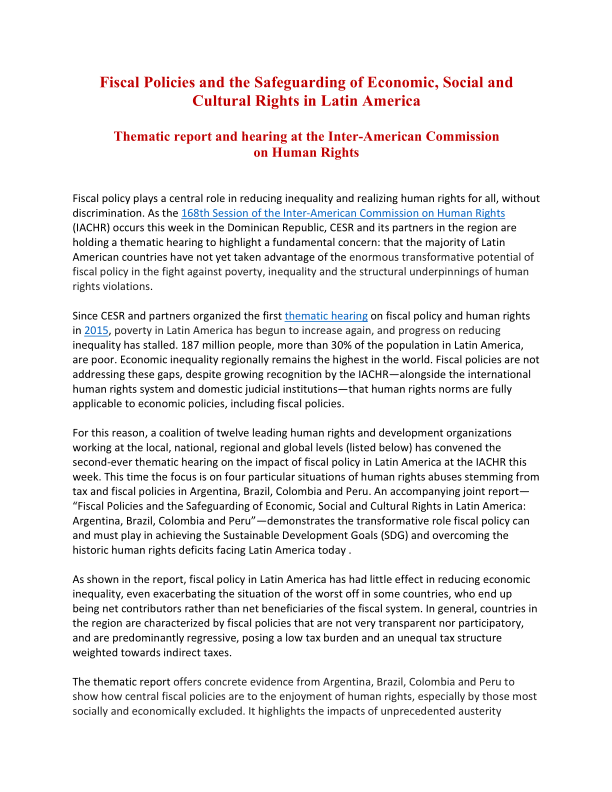 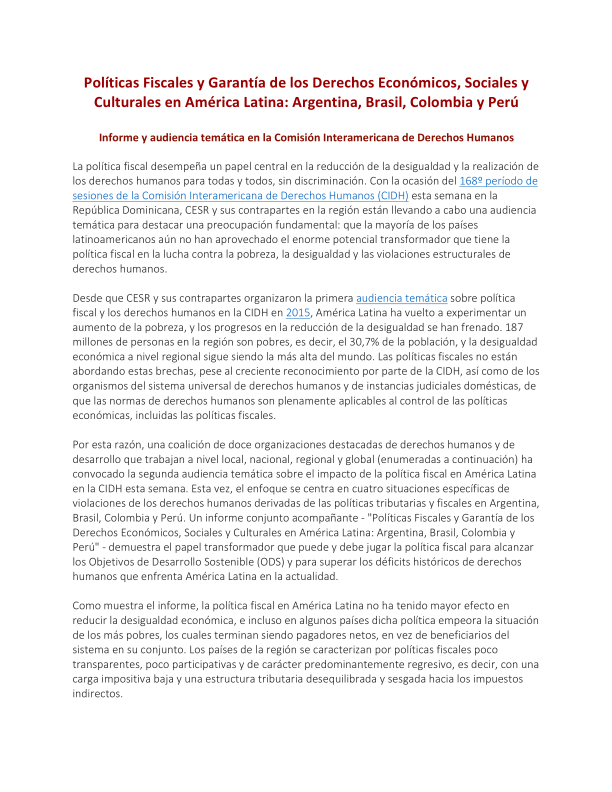