A missed opportunity for ESCR: Reflections on Egypt's appearance before UPR

CESR's Allison Corkery reflects on the challenges of holding Egypt to account before the UN for its ESCR obligations amidst civil society repression and a politically charged context.

Earlier this month, I attended Egypt's appearance before the Human Rights Council's Universal Periodic Review (UPR). The review came one year after the United Nations Committee on Economic, Social and Cultural Rights issued a series of detailed recommendations to Egypt after it reviewed its periodic state report. Unlike the Committee's review, the UPR is a peer-review mechanism. For this reason, there was a great deal of interest among Egyptian civil society in engaging with the review. CESR's national partners considered the review a very timely opportunity to secure a public commitment from the government to advance economic, social and cultural rights, by taking action that would implement the recommendations of the Committee. To this end, we worked together and submitted a joint report in advance of the session.

A number of Egyptian human rights NGOs with whom CESR has been working closely, including the Egyptian Center for Economic and Social Rights, had also planned to attend the session in Geneva; in the end, they decided not to, fearing their participation might result in reprisal or possible persecution. In the months leading up to the session, the political climate in Egypt had become increasingly hostile towards human rights activists and advocates working to draw attention to patterns of human rights violations in the country, including of economic, social and cultural rights. The session itself came just five days before the expiration of the government's ultimatum that NGOs register under the repressive Law 84/2002.

As the only member of the coalition there, the focus of our advocacy in Geneva shifted quite dramatically. While wanting to ensure that relevant actors were made aware of the risks our partners were facing, it was also important that their substantive issues of concern not be overshadowed. We conveyed this message in an open letter to the Members and observers of the Human Rights Council.  The UPR is founded on the principle of participation of all relevant stakeholders, including civil society. Although there were numerous concerns raised about shrinking civil society space more broadly, it was disappointing that the silencing of civil society voices in the UPR process, specifically, was not called out.

More fundamentally, the international community missed an opportunity to send a strong message about the need for a transformative socio-economic agenda in Egypt. Of the 125 states that made interventions during the session, around 30 made at least one recommendation related to economic, social and cultural rights. The diversity among the member states picking up these issues - including Bhutan, the Maldives, Argentina, Uzbekistan, and South Africa - was encouraging. That said, these recommendations were generally framed very vaguely, limiting their utility in agenda-setting at the national level.

The challenges facing Egypt illustrate vividly the indivisibility and interdependence of rights. Since 2011, Egypt has been caught in a deeply troubling spiral of popular dissatisfaction, social unrest and violent repression. The overwhelming majority of interventions focused on this repression.

The political nature of the UPR was certainly a factor influencing the interventions made. There appeared to be a sense from some states that they needed to be "tough" on Egypt. Being tough was interpreted narrowly to mean focusing criticism on civil and political rights, however. They called for a moratorium on the use of the death penalty; the repeal of laws restricting freedom of association; the release of imprisoned journalists and protesters; the protection of rights in counter-terrorism efforts; and action to combat violence against women.

There is no doubt that these are crucial issues that demand urgent action. In the long term, however, ensuring there are checks on the government's power requires tackling the root causes of social unrest and these root causes were all but ignored in the session.  The word "poverty" was only used once, by Bhutan, in the entire session! That's astounding when over 20 million people in Egypt live in poverty and their rights have been all but ignored by the government.

To narrow this gap as the UPR continues into subsequent cycles, it's important to explore the reasons for it. For example, one factor may be that the UPR asks a lot from civil society, particularly in terms of lobbying member states to champion particular issues in the review.

Egyptian civil society groups worked energetically to ensure that economic, social and cultural rights featured prominently in the UPR, with CESR providing legal, policy and advocacy support. This included collaborating on a submission, endorsed by 130 organizations, which was referenced extensively in the stakeholders' report prepared by OHCHR. We also produced a series of 11 short briefing papers for member states. Focusing on specific rights and cross-cutting issues, these briefing papers outlined key concerns; provided supporting evidence for them, including with quantitative data where possible; and suggested recommendations.

It's a significant investment of time and energy in finding out which member states are interested in which issues, tailoring materials for them, contacting them etc. The increasing hostility towards civil society in Egypt in the past year severely curtailed its ability to engage in this kind of activity. We were able to provide additional support to counterbalance that to a degree, but not to the extent needed.

Another factor might be the individualized way that member states prepare their interventions. There were 125 member states on the speakers' list for Egypt's review, which meant each intervention was limited to one minute! It also meant that a handful of issues were raised over and overagain. One of the strengths of the UPR is the breadth of issues it can potentially address. To live up to this potential, however, the human rights record of the state under review needs to be interrogated in a more coordinated and systematic way.

Despite the low priority given to economic, social and cultural rights in the interventions, the Egyptian delegation itself spoke about economic, social and cultural rights in very strong terms, describing them as a "cornerstone" in the achievement of the goals of the Revolution, as well as a "priority concern that requires more resources". On the one hand, this sounds like empty rhetoric in light of the reality on the ground. On the other hand, however, the fact that the government felt the need to make such overtures is testament to the exceptional advocacy Egyptian NGOs have been pursuing at the national level. Of course, sustained pressure to act on these commitments is needed if they are to be meaningful. To that end, we are exploring ways to support Egyptian NGOs in translating the recommendations into measurable targets whose progress can be tracked publically, in order to foster interest in, and accountability for, the implementation of UPR recommendations by national actors. 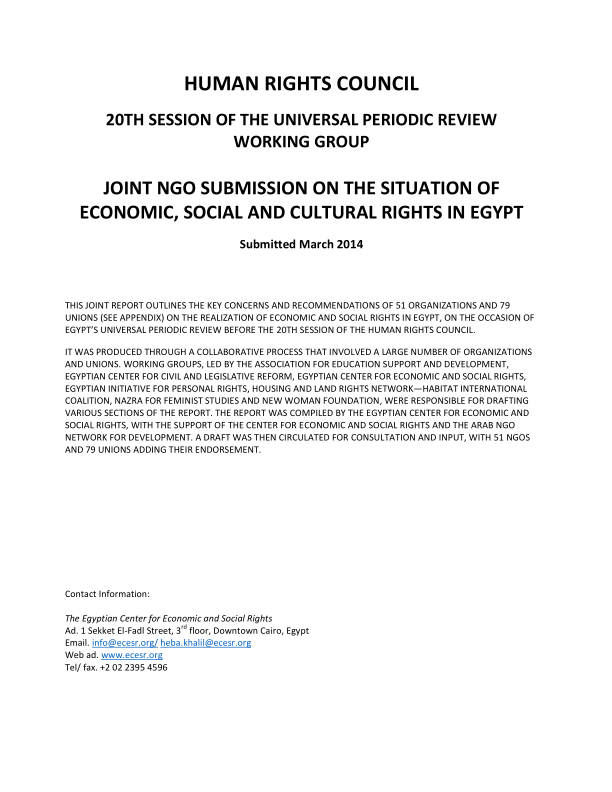